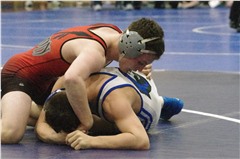 The Jackson wrestling team took fifth place in this year’s Class 4 District 1 Tournament by scoring 116.5 points, which was just two in a half points below fourth-place tournament host Northwest.

Five of Jackson’s wrestlers placed in the top four of the district tournament, which means these five will compete in the Class 4 State Championship Meet this weekend at Mizzou Arena in Columbia, Missouri.

Amelunke, who is now 31-15 overall in his freshman season for Jackson, faced Marquette sophomore Marco Perla to see who would advance to the 195-pound third-place match and the state championship meet.

With this match lasting all three periods, Amelunke managed to score the only point in the bout to defeat Perla 1-0 and head to the third-place match against Eureka’s Brendan Carter. The 195-pound third-place match also went all three periods, and also into sudden death, with Amelunke coming out on top 3-1 to place third overall in the tournament.

Amelunke suffered his only loss of the tournament to Christian Brothers College junior Charlie Cadell 7-3, who placed second in the tournament after losing to Parkway South senior Jack Marak 6-3 in the 195-pound district championship match.

Cole only had one match prior to his loss to Cadell since he received a bye in the first round, and that match was against Lafayette junior Hayden Bollinger. Amelunke won this match in sudden death 7-6.

If he places at the state meet, Amelunke has the chance to be the first freshman for Jackson to earn All-State honors since four-time All-State wrestler Jarrett Reisenbichler did so in 2012.

Dickerson, who is currently 37-6 following the district tournament, fell to eventual 220-pound Class 4 District 1 Champion, Lindbergh junior Logan Wells, in sudden death 3-1 in the semifinal match of the championship round.

Dickerson’s next match to advance to the third-place bout and to the state meet did not last nearly as long since Bryce pinned CBC sophomore Juliun Beach 56 seconds into the match.

Dickerson then went on to face Fox senior Shane Wiegand for third place in his final match of the district tournament. Bryce defeated Wiegand 3-2 to take third and to make to his second-straight appearance at the Class 4 State Championship Meet.

Heading into the first-place matches in the championship round of the Class 4 District 1 Tournament, Gus Guilliams was the first to wrestle for Jackson. Gus faced a familiar opponent in Parkway South sophomore Garrett Kloeppel.

The two previously met at this season’s Flyer Classic on Dec. 28, where Kloeppel handed Gus his only loss of the season 6-1 to win the 126-pound tournament championship.

With the 126-pound Class 4 District 1 Championship on the line, the match ended in the fashion with Kloeppel defeating Gus 7-0 to win the title and hand Guilliams his second loss of the season.

Even though Guilliams was not able to capture his second district championship after winning the 120-pound bracket in 2016, he will be competing in his third-straight state championship meet.

Next up for Jackson in the first-place and final round of the district tournament was Flath at 138 pounds where he faced Northwest senior Tyler Stegall.

Flath, who is now 36-7 overall heading into his first state championship meet, pinned his first two opponents in the tournament and then defeated Lindbergh sophomore Dawson Javier 11-9 to advance to the championship match.

Stegall, who has only lost three matches this season, and also placed fourth in last year’s state meet at 138 pounds, pinned Flath one minute and 24 seconds into the second period to claim the 138-pound district championship.

The last hope for Jackson to have a district champion this season was Payne Guilliams, who went up against Eureka senior Alec Hagan.

Hagan was last year’s 138-pound State Champion in Class 4, and has only lost one match in his last two seasons. Like Payne’s cousin Gus and Kloeppel, Guilliams and Hagan also faced each other before this match this season.

The two met at the Kyle Thrasher Tournament on Jan. 28 in the 152-pound first-place match. Hagan handed Guilliams his third loss of the season on that day 8-0, and then managed to hand him his fourth loss of the season in the district championship 13-2.

Guilliams only had to wrestle in three matches in the tournament. He received a bye in round one and then won his first match by fall and second by decision to advance to his first ever district championship match.

This year’s state championship meet will be the second of Payne’s career, where in 2016 he failed to earn All-State honors by not placing in the 138-pound weight class.

Jackson had two other wrestlers advance to the third-place semifinal match who had a chance to place at the tournament and qualify for state.

Those two wrestlers were freshman Alec Bailey at 106 pounds and junior Owen Leible at 285 pounds, but each of them lost in their final match of the season by decision.

Bailey, who had an impressive freshman season on the varsity squad with a 37-6 record and a SEMO Conference Championship, fell to Lafayette sophomore Jayden Carson 10-0 to end his season.

Leible lost his first match of districts to Fox sophomore Joey Johnson by pinfall three minutes and 25 seconds into the bout, but then went on a three-match winning streak. He first defeated Lindbergh junior Thomas Floyd by pin with 1:45 left in the third period.

Leible won his next two matches by decision before falling to CBC sophomore Faze Thomas 1-0, who went on to win third place 11-0 over Johnson.

Leible only wrestled a total of 17 matches this season due to injury, but managed to finish with an above .500 record at 9-8.

Last year in the Class 4 State Championship meet, Jackson had a total of eight wrestlers qualify with three of them earning All-State honors.

Jackson has yet to place in the top 10 of the state meet since 2014 when the team had nine wrestlers qualify and three go on to place and earn All-State recognition.