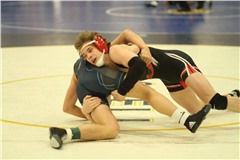 Last season, Jackson’s wrestling team had five members qualify for the Class 4 State Championship Meet, but this year the Indians will send one more.

At this weekend’s Class 4 District 1 Tournament, six Jackson wrestlers were able to qualify for state by reaching the third-place match in their respective weight class.

First was sophomore Alec Bailey (43-7), who moved down a weight class from 113 to 106, the same class he wrestled in last year.

Bailey defeated his first opponent in the quarterfinals, Christian Brothers College junior Collin Schaedler (19-19), by major decision at 10-2 to advance to the semifinals.

This is where Bailey faced Lindbergh freshman J.P. Homfeld (40-6), who managed to hold Bailey scoreless for a 4-0 win. This moved Bailey to the consolation semifinals where he faced Eureka sophomore Chandler Nelson (6-6).

Bailey ended up pinning Nelson in the third period with only one minute, 13 seconds remaining to earn his first trip to Columbia.

In the 106-pound third-place match, Bailey found himself victorious over Lafayette sophomore Jalin Reese with a 3-2 decision. Reese fell to the eventual district champion in Seckman sophomore Skyler Akers by a 10-5 decision in the championship semifinals.

Qualifying next for Jackson was sophomore Rhett Wiseman (33-4), who switched weight classes with Bailey to wrestle at 113 in the tournament.

Wiseman defeated Northwest junior Carter Wilhelm (34-9) in the quarterfinals to advance to the championship semis where he faced nationally ranked senior Cevion Severado out of CBC.

Eventual district champion Severado was able to pin Wiseman in the second period with only 10 seconds remaining.

In the consolation semifinals, it was another Jackson-Eureka matchup as Wiseman went up against sophomore Ben Stubblefield (18-15), who he defeated 4-2.

In the 113-pound third-place match, Wiseman was pinned by Seckman senior Jack Wrocklage 26 seconds into the second period.

Jackson’s next wrestler to qualify for state was freshman Garner Horman (38-6) at 132 pounds, whose only loss in the tournament came to Parkway South junior Garret Kloeppel (29-2).

Horman didn’t receive a bye in the first round like Bailey and Wiseman did in their weight classes, but he made quick work of his opponent, Kirkwood sophomore Terell Snider (12-22), in the first round by pinning him 1:18 into the match.

Horman then pinned Fox junior Tanner Koester (8-7) 20 seconds into the second period in the quarterfinals.

In the consolation semifinals, Horman earned his first trip to state decisively by technical fall at 21-4 over Marquette freshman Aidan Rudman (30-22).

Horman won his final match of the tournament in the 132-pound third-place match with a 9-3 decision over Seckman senior Tyler Lowe (23-29).
The final three state qualifiers for Jackson were upperclassmen, starting with junior Braden Vaugier (46-9) at 138 pounds.

Vaugier’s only loss of the tournament came to eventual district champion in CBC junior Kyle Prewitt by a 7-0 decision in the semifinals.

In the consolation semifinals to earn a trip to state, Vaugier handed the same defeat to his opponent with a 7-0 win over Fox senior Matthew Florex (35-17).

At 170 pounds was Jackson’s next state qualifier in junior Justin Singleton (40-13), who also fell to an eventual district champion in Marquette senior Jalen Gayfield (43-5) in the semifinals by a 13-8 decision.

Singleton received a bye to start the tournament, and then he defeated Parkway South sophomore Max Rinklin (22-14) by a 5-4 decision in the quarterfinals.

In the third-place match, Singleton was pinned in the first period in 47 seconds by Seckman junior Jermey Ashlock (41-12) to take fourth place.

Leible fell in the quarterfinals to Fox junior Joseph Johnson (37-8) by a 6-2 decision, but won his next two matches handedly over Marquette sophomore Soung You (3-6) at 7-1 then Seckman sophomore Joe Klutho (19-16) at 6-1.

Leible and Joseph met once again in the third-place match with Joseph winning in sudden victory at 3-1.