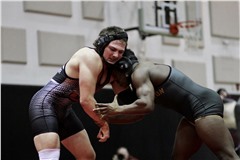 Jackson scored a total of 146.5 points as six of the Indians wrestlers finished in the top eight of their respective weight class. None of Jackson’s wrestlers took first overall as tournament champion Whitfield had four gold medalists, which finished with a team score of 204.5.

Finishing as the tournament runner-up was Jefferson City with 190 points, while Staley and Lafayette also placed above Jackson at third [188.5] and fourth [159] respectively.

Three of the Indians six wrestlers to place in the tournament advanced to their respective championship match, which were seniors Cole Amelunke, Noah Uhrhan and Riley Wiseman. The remaining half in seniors Alec Bailey and David Ekstam along with junior Garner Horman did not place higher than fourth.

Amelunke (33-1) entered the tournament with a perfect record at 29-0 having wrestled each previous match at 195 pounds, but he moved down to 182 class for this past weekend’s competition.

Amelunke had no problem earning a spot in the championship round of day two as he recorded back-to-back pinfalls on Friday. Amelunke first pinned Brentwood sophomore Henry Ritter (8-9) in 40 seconds, while it took him 3:43 to pin McCluer North senior Timothy Robertson (16-19) to the mat.

To start day two in the quarterfinal round, Amelunke continued his pin streak against Vianney junior Roman Graiff (28-10) by putting his shoulders against the mat with 19 seconds left in the second period.

Amelunke was not able to win his next match in the semifinal as easily since his bout with Lee Summit West senior Jake Callahan (27-4) lasted all three rounds. However, Amelunke was still able to finish on top by defeating Callahan via a 6-4 decision.

The Kyle Thrasher 182-pound championship match is where Amelunke’s perfect season came to an end as he only fell to Whitfield sophomore Chase Brock (19-0) by one point at 1-0. Brock finished as the Class 1 state runner-up at 160 pounds last year.

Jackson’s 160-pounder Uhrhan (33-9) received a bye in the first round, so his first match of the tournament was against Northwest senior Christian Trigg (15-7), who Uhrhan defeated via decision at 6-4. Uhrhan recorded his only pin of the tourney against Rock Bridge junior Marquis McCaster (22-6) by pinning him at the end of the second period in the quarterfinals.

Uhrhan’s final two bouts lasted all three periods as he was able to defeat Lindbergh senior Alexander Lauer (30-12) by a one point in a 4-3 decision to reach the championship match.

For the 160-pound Kyle Thrasher title, Uhrhan faced Fort Zumwalt North freshman Chance Cole (31-2). Like Amelunke’s championship bout, Uhrhan’s was also decided by one point as he fell to Cole in a 6-5 decision.

Jackson’s final wrestler to compete for first place in the tournament was Wiseman at 113 pounds. While Wiseman failed to record a pinfall throughout the tourney, he did win his first two matches by a wide margin.

Wiseman defeated Fort Zumwalt North sophomore Thien Le (19-16) by major decision at 13-3 in the first round, followed by picking up a technical fall over St. James freshman Blake Marlatt (11-22) at 17-0 in the third period of the second round.

To start day two of the tournament in the quarterfinals, Wiseman faced off against Jefferson City junior DaJuan Wallace (25-13) in a match that lasted all three periods. Wiseman came away with a win over Wallace by a 6-3 decision. Wiseman then received a medical forfeit over Francis Howell freshman David Cross (27-3) in the semis to advance to the championship match.

For the 113-pound title, Wiseman went against reigning Class 1 106-pound State Champion Whitfield sophomore Evan Binder (36-5). This bout lasted all three periods as well, but Wiseman failed to score on Binder in a 5-0 defeat.

The next Jackson wrestler to place the highest was Ekstam (33-5) at 220 pounds, who started this year’s Kyle Thrasher tourney with a bye in the first round. In the second round, Ekstam won his match with ease by pinning St. James sophomore Seth Keeney (5-15) with 24 seconds left in the first period.

It took extra time for Ekstam to win his next match in the quarterfinals on day two against Marquette senior Isaiah Brisseauk (28-15). Ekstam defeated Brisseauk 5-3 in sudden victory.

In the semifinals, Ekstam took on Whitfield sophomore Keith Miley (30-6), who was able to pin the senior with 31 seconds left in the second period. Miley fell to Northwest senior Chase Stegall (30-0) by a 6-2 decision in the 220-pound title match.

Miley and Stegall both finished as runner ups in last year’s state tournament as Miley took second at 220 in Class 1, while Stegall finished second overall at 195 pounds in Class 4.

As for Ekstam, he defeated Staley sophomore Johnie Shepard (28-11) by a 3-1 decision in sudden victory in the consolation semifinals to advance to the third-place bout.

For third place at 220, Ekstam faced Brisseaux in a rematch of the quarterfinals, but this time Brisseaux came away with the win in sudden victory at 3-1.

For the Indians final two place finishers, both Bailey (38-7) and Horman (33-3) fell in their respective consolation semifinal matches to only wrestle for fifth.

Horman managed to win his match and take fifth at 152 pounds with a 10-0 major decision win over Whitfield senior Matthew Schueddig (22-9) in the fifth-place match. Horman fell to Holt senior Nathan Undertajlo (31-8) by a score of 7-6 in the consolation semis.

Horman’s loss in the championship bracket came to Francis Howell Central junior Kaden Hart (29-4) via a 5-3 decision in the semifinals. Hart went on to fall to Jefferson City senior William Kuster (30-2) 8-6 in sudden victory of the 152-pound championship match.

Bailey fell in the 126-pound fifth-place bout to Lindbergh junior James Homfeld (28-5) by decision at 3-1, whom he also lost to previously in the championship quarterfinals 3-0.

Jackson now has a week off from competition until the Indians compete in the Class 4 District 1 Tournament starting Feb. 14 at Northwest.