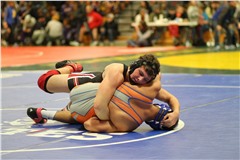 One week before the Jackson wrestling team attempts to win its second-straight SEMO Conference Tournament Championship, the Indians traveled to St. Louis for the annual St. Charles West Invitational.

Francis Howell took first place with a score of 202.5 as three of the team’s wrestlers won their respective bracket.

Jackson was able to place seventh overall in the tournament while only having nine wrestlers competing out of the 14 weight classes.

None of the teams three seniors wrestled in the meet, but five Indians still managed to place in the top five to help lead Jackson to 115 points.

The first was sophomore Alec Bailey (32-4), who wrestled at 106 pounds instead of 113, his usual weight class. Bailey took fourth in the 106-pound bracket, falling to Blue Springs’ Korbin Shepherd (24-2) by a 6-4 decision in the semifinals.

Bailey defeated Class 4 District 1 opponent Devin Haag (29-12) out of Seckman by pinfall to advance to the third-place match against Rock Bridge’s Evan Diehls (27-4).

Bailey and Diehls’ match went all three periods with Diehls coming out on top by decision, 5-4.

Both wrestlers Bailey lost to are ranked in the top six of the 106-pound weight class in Class 4 with Shepherd at third and Diehls at six.

The first upperclassman for Jackson to place in the top five was junior Braden Vaugier (34-5), who took fifth overall by defeating Francis Howell’s Garrett Woods (16-9) by major decision, 11-2.

Before that match, Vaugier defeated Woods in the quarterfinals by decision, 5-2, to advance to the semifinals where he faced undefeated Sean Sax (29-0) out of Waynesville.

Sax is the No. 1 ranked wrestler at 138 pounds in Class 4, who was able to pin Vaugier in the third and final period with 1:06 remaining in the match.

Vaugier lost his next match as well in the consolation semifinals to Seckman’s Anthony Chellew (21-12) by a 14-7 decision.

The only wrestler to advance to the championship match in their respective bracket was junior Justin Singleton (30-6), who faced conference foe Dylan Allen (35-4) out of Farmington. Allen currently ranks second at 170 pounds in Class 3.

To reach the first-place bout, Singleton defeated St. Charles West’s Brendan Noack (21-11) by decision, 4-2, in the quarterfinals. Singleton then pinned his next opponent in the semifinals with 58 seconds left in the match, which was Fort Zumwalt West’s Austin Reeves (28-7).

The championship match between Singleton and Allen went all three periods, but Singleton failed to score a point as Allen won via decision at 3-0.

The final wrestler for Jackson to place in the top five of the invitational was junior Braxton Green (29-5) in the heavyweight bracket.

In all three of his four matches wrestled, Green won via pinfall starting with Rock Bridge’s Will Bower (15-13) with only five seconds remaining in the second period.

In the semifinals is where Green suffered his lone defeat in the tournament, which came against De Smet’s Jacobi Jackson (17-5) by only a one-point decision at 3-2.

In the opening seconds of the third and final period, Green pinned conference opponent Chase Berg (11-25) out of Farmington to advance to the third-place match.

For third place, Green went up against Eureka’s Kurtis Winegarder (14-6), as the match ended in the first period with 34 remaining since Green pinned Winegarder’s shoulders to the mat to win.

Three other wrestlers for Jackson placed right outside of the top five in sixth place starting with sophomore Grady Livingston (23-14) at 120 pounds.

Livingston only received one forfeit in the tournament, and lost his first match to Hannibal’s Evan Kreith (22-11) by pinfall in round three.

In the quarterfinals, Livingston went up against Francis Howell’s Evan Kreith (20-10), with Kreith winning by major decision at 14-5.

Livingston lost his final two matches, the first a 9-7 decision in a rematch against Rethorn. The second was to Eureka’s Kyle Hurst (15-10) by pinfall in the first 21 seconds.

The next sixth-place finisher for Jackson was sophomore Cole Amelunke (30-8), who started the championship bracket with a pinfall with 34 seconds left in the second period over Lawson Lackey (19-9) out of Blue Springs.

This was Amelunke’s final win of the tournament as he fell to district opponent in Seckman’s Jermey Ashlock (23-8) by decision, 7-5, in the semifinals where he sustained an injury. Amelunke lost his final two matches by medical forfeit to place sixth overall.

The final Jackson wrestler to place sixth in the invitational was junior Wesley Blattel (15-15), who only won one of his five matches wrestled.

In round three, Blattel fell to Francis Howell’s Nathan Odonohue (29-7) as he was pinned with only three seconds remaining in the first period.

Blattel was pinned once again to start the championship bracket in the quarter-finals by Waynesville’s Ethan Gatzmeyer (20-7) 39 seconds into the second period.

In the first round of the consolation bracket is where Blattel picked up his win by defeating Fort Zumwalt West’s Matt Lange (11-19) via decision, 3-1.

Blattel faced Odonohue once again in the consolation semifinals, being pinned once again, this time 34 seconds into the second.

Blattel was pinned by Hannibal’s Chase Kirby (15-11) with 28 seconds left in the fifth-place match.