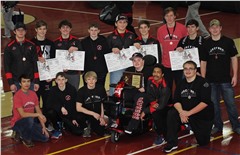 The final day of this year’s SEMO Conference wrestling meet held in Farmington was met by Winter Storm Harper, but this didn’t stop Jackson from winning the tournament for a third-straight season.

Eight Indians reached their respective first-place matches as five of them came away with conference gold, while a total of 13 placed in the top four of the meet to score 610.5 points. Tournament host Farmington came away with three conference champions and finished second overall with 467.5 points

“You definitely want to win the conference, but we kind of wanted to make a big impact to let them know we have 14 good wrestlers,” Jackson head coach Steve Wachter said. “I think we won it with as large of a margin we had is because of our team balance. … We had some individuals that wrestled really outstanding — not only the ones that got first place but some of them that came back and wrestled for third.”

One of the individual championship performances for Jackson was put on by none other than junior Alec Bailey (29-3), who became the team’s only current three-time conference champion by taking first in the 120-pound weight class.

Bailey won last year’s 113-pound title as a sophomore and 106 as a freshman in 2017, which was also the last time the Indians had multiple conference champions.

“Alec wrestled really, really well,” Wachter said. “He wrestled very consistently through the whole tournament, and I was really pleased with him. He’s starting to wrestle really well in all three levels of wrestling — on his feet, underneath and on top.”

Bailey received a bye in rounds one and three on day one of the meet, but won his other two matches via pinfall. He pinned Cape Central sophomore August Phegley (17-17) with 57 seconds left in his round-two match and finally Sikeston sophomore Devyn Tinsley (15-23) 32 seconds into the quarterfinal bout.

At the start of day two, Bailey wrestled in his only match that lasted all three periods at conference against North County sophomore Jonathan Coroama (29-4). Bailey picked up the win by decision at 5-1 to meet Farmington junior Kyle Crawford (23-8) in the finals.

Crawford received a medical forfeit in the semifinals where he would’ve faced Hillsboro freshman Dalton Litzsinger (33-4). Bailey claimed his third conference championship by pinning Crawford with 43 seconds left in the second period of the title bout.

Jackson senior Braden Vaugier (31-3) was also able to become a multiple conference champion along with Bailey by taking first in this year’s 152-pound bracket, which is now his second conference title.

“Braden has also put in a lot of time, and he’s done a lot of traveling with us,” Wachter said. “He wrestled on the Disney dual team this summer. Last year he lost a really tight match in overtime with a Farmington wrestler or it would’ve been his third time winning the conference. He’s a really good positional wrestler — he’s really hard to score on, and he just continued that throughout the whole tournament.”

Vaugier only received one bye in the tournament and pinned his first three opponents and didn’t wrestle in the third period until finals.

In his quarterfinal bout, Vaugier pinned Park Hills Central junior William Mayberry (11-12) with 36 seconds left in the second period to reach the semifinals, where he received a medical forfeit to Hillsboro senior Logan Hendrix (11-7).

Vaugier faced fellow senior Noah Ogden (26-13) out of Ste. Genevieve in the championship as Vaugier was able to outscore Ogden by an 8-6 decision to win the title.

As a freshman, Amelunke competed at 195 pounds and lost to former Ste. Genevieve wrestler Wade Hahn (43-1) for the title, who went on to place third at state in Class 2.

Amelunke moved down to his current weight class of 182 last season, where he was defeated by Windsor’s Ryan Yarnell. Yarnell finished the season undefeated at 53-0 and won the 182-pound Class 3 State Championship.

“Cole is an outstanding wrestler, and he’s always had to battle somebody really good,” Wachter said. “His district [weight class] was unbelievable last year. I think they went one, two and three at the state championship last year. He’s always had a tough going, but he just kind of weathers the storm.”

Amelunke won this year’s 182-pound bracket in dominating fashion as he won each match that he wrestled in by pinfall — two of which were in the first period. He first pinned North County senior Jase Odle (18-11) with 51 seconds left in the first period of round two.

Amelunke then pinned Ste. Genevieve freshman Dale Propst (3-5) with 22 seconds left of his third-round match in the second period. In the quarterfinals against Kennett freshman Hayden Higgins (8-6), Amelunke came up with his second pin in the first, this time 49 seconds into the bout to reach the semifinals.

He received a medical forfeit in the semifinals to Hillsboro sophomore Zach McNees (18-15) to face Sikeston junior Brian Jasper for conference gold.

The title bout only lasted two minutes and 35 seconds as Amelunke was able to pin Jasper’s shoulders down in the second period.

Becoming the next first-time conference champion for Jackson was sophomore Garner Horman (32-2) at 145 pounds, who fell in last year’s 132-pound title match to Hillsboro’s Dylan Owens, who went on to place sixth in the Class 3 State Meet.

Horman pinned his first opponent in North County junior Kyle Cresswell (18-14) one minute into the match and then defeated Ste. Genevieve sophomore Kaleb Myracle by technical fall at 16-0.

The quarterfinals is where Horman first wrestled all three periods in the tournament but came away with a 16-3 major decision win over Farmington junior Schmuke Branch (21-13).

Horman faced Sikeston senior Quincy Nelson (34-10) in the semifinals and came away with a four-point win at 6-2 to reach the championship match.

Horman faced Dexter junior Mason Keena (22-8) for the 145-pound title and was able to pin the upperclassman with 19 seconds left in the second period.

“Garner had a really outstanding wrestler last year from Hillsboro that beat him,” Wachter said. “He’s a really good scramble wrestler. If anything turns into a scramble, he usually ends up on top of things and I thought he wrestled really consistently throughout the whole conference tournament.”

The final wrestler to come away with a conference title for Jackson was who Coach Wachter describes as his “grinder” in junior Noah Uhrhan (32-4) at 160 pounds.

Uhrhan didn’t receive a single bye in this year’s conference tournament, but he was able to win five of his six matches by pinfall. Three of his pins came in the first period in rounds two and three as well as in the quarterfinals.

In the semifinals, Uhrhan ended the match with 50 seconds left as he was able to pin Sikeston senior Sean Blanch-field’s (21-13) shoulders to the mat to advance to his first conference title match.

Uhrhan faced Valle Catholic junior Trey Huck (15-9) for the 160-pound championship, a match that lasted all three periods with Uhrhan picking up the 8-3 win.

“Noah is very tough and very physical, and he’s just worked so hard to become good,” Wachter said. “He can go hard for six minutes — he gets after you.”