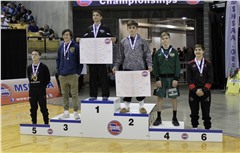 The Jackson wrestling team started with six wrestlers in this year’s Class 4 State Championship Meet, but the Indians only finished with one grappler on the podium at Mizzou Arena.

This was sophomore Alec Bailey, who took sixth place in the 106-pound bracket as he had to wrestleback in each consolation match after falling in the opening round to freshman runner-up Korbin Shepard (41-5) out of Blue Springs.

Only one wrestler for Jackson won their opening match, junior Braden Vaugier at 138 pounds. He defeated Park Hill South senior Andrew Mikuls (43-14) by decision at 5-2.

Bailey originally wrestled at 113 pounds this season, but he made the move to 106 before the start of the district tournament.

Bailey entered the tournament as the sixth ranked 106-pounder in Class 4 and pinned his second opponent in Hazelwood West sophomore Mark Mallari (18-18) one minute, 37 seconds into the match for the first round of wrestlebacks.

In the second round of the consolation bracket, Bailey faced Jefferson City junior Garrett Butel (32-17) with the match lasting all three periods. Bailey came out victorious by a 2-0 decision, earning himself a spot in consolation quarterfinals.

If a wrestler wins their consolation quarterfinal at state, this automatically earns them a spot in the top six to garner All-State honors.

Bailey faced Ozark freshman Clayton Moisen (31-21) with the podium on the line.

The match was tied 1-1 heading into the final 10 seconds of the third period, but Bailey was able to gain enough position on Moisen for a take down to score two more points for a 3-1 win.

Bailey became the first sophomore for Jackson to earn All-State honors since 2014, back when former Indian Carson McCord did so at 170 pounds.

Vaugier also advanced to the consolation quarterfinals after falling in the championship bracket to eventual state champion in Waynesville senior Sean Sax (49-0) by pinfall (3:51).

Vaugier defeated Fort Osage junior Roman Tinoco by a 6-3 decision in round two of wrestlebacks to move on to face Blue Springs senior Jett Merlo (44-8) in the consolation quarterfinals.

Against Merlo, Vaugier only managed to score one point as he fell by decision at 5-1 to bring his junior season to a close, finishing with an overall record of 48-11. This was the most wins by any Jackson wrestler this season.

Bailey’s final win of the year was against Moisen as he faced Lindbergh freshman J.P. Homfeld (43-8), whom he fell to twice by decision this season heading into state.

Homfeld defeated Bailey once again, this time by pinfall with seven seconds remaining in the third and final period.

This loss moved Bailey to the fifth-place match where he faced De Smet junior Eric Lovelace (45-4). Lovelace was able to come out on top over Bailey with a 1-0 decision to take fifth overall.

Bailey finishes his sophomore year with an overall record of 46-10.

The other four state qualifiers for Jackson in this year’s meet were sophomore Rhett Wiseman at 113 pounds, freshman Garner Horman at 132, junior Justin Singleton at 170 and senior Owen Leible at 285.

Horman, Singleton and Wiseman failed to advance to day two of the state meet as they fell in the opening round and then the first round of wrestlebacks.

Wiseman’s first match of the tournament was against eventual fifth-place 113-pounder in Francis Howell sophomore Josh Kyle (38-13), where Wiseman was pinned 15 seconds into the second period.

In his final match of the state meet, Wiseman faced Blue Springs South sophomore Jastin Robertson (37-11), who held Wiseman to only one point for the win with a 7-1 decision.

Wiseman finished with an overall record of 33-6, having wrestled primarily at 106  pounds this season.

This was not enough as Godier defeated Horman by decision at 7-4.

Horman’s final match of the tournament in the first round of wrestlebacks was against a fellow freshman in Hickman’s Jacob Waldron, who pinned Horman with 41 seconds remaining in the match.

Horman finishes with an overall record of 38-8 in his first season at Jackson.

Later that evening in the first round of wrestlebacks, Singleton’s junior season came to an end when he fell to Smith-Cotton senior Gauge Young (32-10) 4-2, bringing Singleton’s overall record to 40-15.

It only took Conley 50 seconds to pin Leible to advance to the quarterfinals and eventually win the 285-pound state championship.

This sent Leible to the first round of consolation, where he faced Fort Osage sophomore Ikani Tuiono (38-15) to see which wrestler advanced to day two.

Leible came out on top over Tuiono by a 7-3 decision in a match that went into overtime at 3-3.

Leible’s final match went into overtime as well, which was against Francis Howell sophomore Ryan Skillington (40-13).

It was tied at 1-1 heading into sudden victory, but Skillington won 6-1.