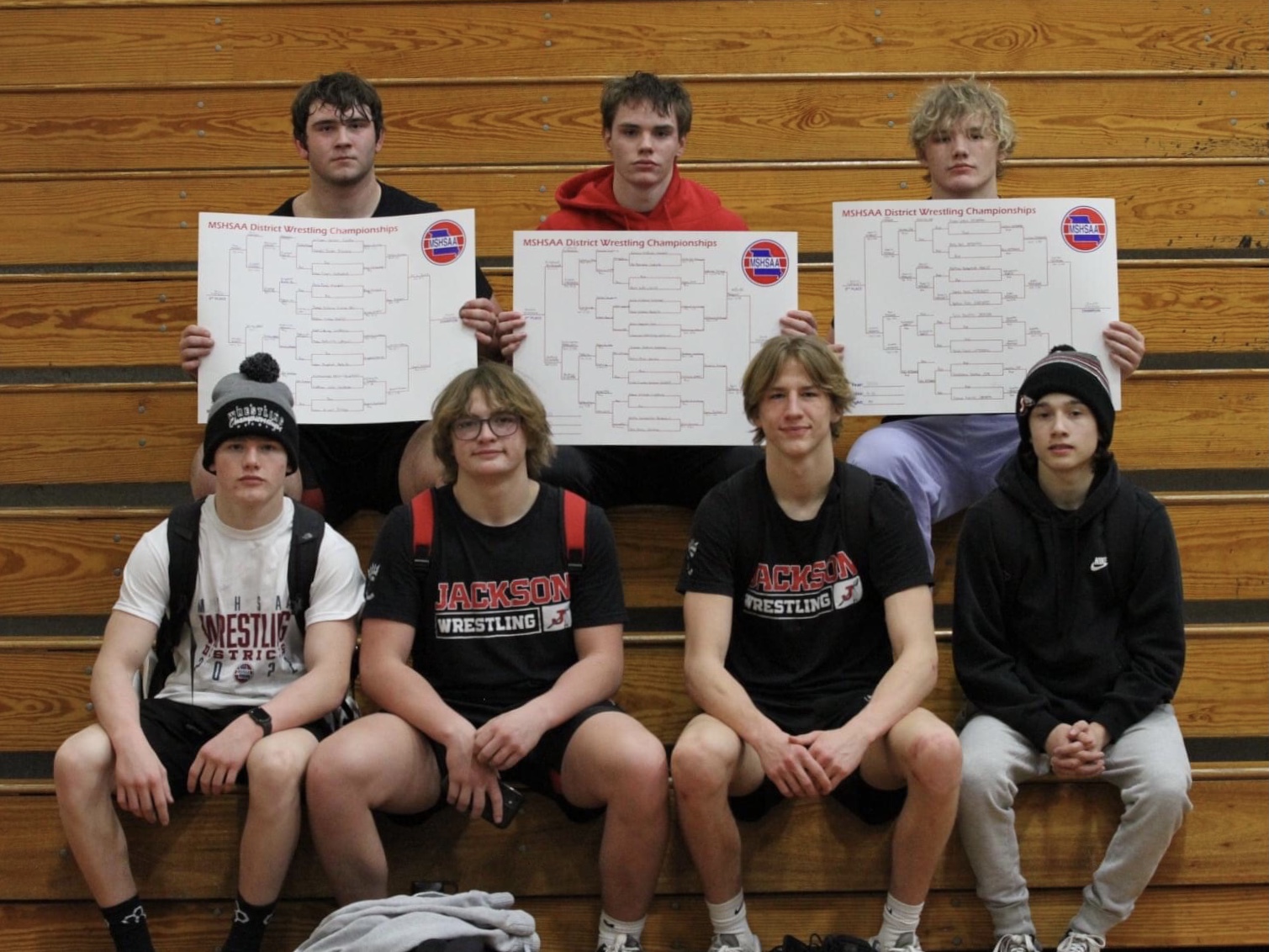 This past weekend at the Class 4 District 1 Tournament, the Jackson wrestling team placed third overall with 155 points and had seven wrestlers qualifty to compete in this week’s state championship meet.

Three of those Indians were able to win their respective weight class to come away as Class 4 District 1 Champions, which were senior heavyweight Liam Bryant, senior 152-pounder Jace Davis and junior 195-pounder Tyler Beyatte.

Having the most dominant district tournament out of Jackson’s three champions was Bryant (32-3), who was able to pin all three of his opponents for his second-straight individual district title. Liam pinned Eureka senior William Nelson (25-3) with 30 seconds left in the third and final of the heavyweight championship bout.

Leading up to that, Bryant pinned Linbergh senior Matt Ludwig (28-11) in the second period at the three-minute, 21-second mark. He pinned Oakville senior Mukhamedal Akhmedov (18-6) with 27 seconds left in the first period of the quarterfinal round.

Davis took fourth at 145 pounds in last year’s state meet as he hopes to return to the podium after winning his second-straight district championship this weekend.

In the 152-pound district title match, Davis (41-6) faced off against Marquette senior Tommy McBride (35-6) in a bout that went into overtime. Davis came away with a 4-2 tiebreaking win over McBride for the second and final district championship of his high school career.

To reach the title match, Davis defeated Seckman senior Drake Jenkins (33-10) by decision at 6-2 in the semifinals. Jace did this after pinning Linbergh junior Adam Duchek (24-20) at the 1:32-mark in the quarterfinals.

Davis also didn’t receive a bye in the first round like Bryant did, but he made quick work of Parkway South senior Adam Duchek (10-10) by pinning him in 52 seconds.

Beyatte (40-4) will compete in his first-ever state championship tournament this week after beating Seckman senior Dylan Carlton (35-5) 4-2 for the 195-pound district title.

This was also Beyatte’s first district championship, of course, and he had quite the close matchup in the semifinals versus Lindbergh junior Connor Kuehler (23-7). Beyatte only beat Kuehler by one point, 2-1, en route to winning their weight class.

Beyatte, who received a bye in the first round, only needed 64 seconds to reach the semifinals and pin Lafayette senior Nick Harrell (14-21) in the quarterfinals.

As for Jackson’s other state qualifiers, Hicks, Horman and Vassalli all reached their respective championship matches and placed second, while Guilliams fell in the semifinals and eventually took third.

Horman (31-6) was by far the closest to becoming what would’ve been the Indians fourth individual district champion as he only lost his title match by one point. Griffin took on Lafayette sophomore Andrew Wier (34-3) for the 182-pound district title, where Wier took the match by a score of 4-3.

Wier received a bye in the first round while pinning both his quarterfinal and semifinal opponents leading up to his match with Horman.

As for Horman, he also received a bye in the first and then pinned Eureka freshman Blake Ashby (14-15) at the 2:31-mark of the quarterfinal round. Griffin then faced Seckman sophomore Jayden Ashlock (40-7) in a semifinal that lasted all three rounds in favor of Horman at 11-9.

Vassalli (40-5) lost to Seckman junior Xander Harris (26-5) by six points, 12-6, for the 106-pound championship. Landon, who received a bye in the first round, beat Lafayette freshman Jackson Tenny (26-13) by decision at 2-0 in the semifinals and pinned Parkway South junior Tyre Valiant in 35 seconds of the quarterfinal matchup.

Hicks fell in his 132-pound title matchup by eight points to Seckman senior Aydan Cook (28-6) via major decision at 12-4. To reach the championship bout, Gavin won his semifinal match over Lafayette senior Alexander Doehring (27-16) by decision at 7-3.