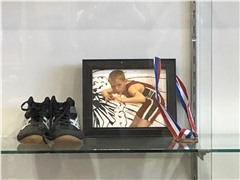 The Jackson wrestling team recently held its annual end of the year banquet, but before that the program received a trophy case.

It was donated to the program by the Play for Parker Foundation, which was started by Robin and James King after their son Parker passed away in 2012 to keep his memory alive.

Parker was a member of the Jackson USA Wrestling program, where he was known as the “Big Dawg” and went to state at 90 pounds in the 8-Under division in 2011.

Parker was set to wrestle in what is now called the Parker King Memorial Tomahawk Challenge in 2012, but he was in a UTV accident the day before.

During the tournament the following day, everyone in attendance said a prayer for Parker, which was taped and sent to the family.

“[Parker] had a heart of gold — he had a great spirit, he loved the outdoors and he loved sports,” Robin King said. “… He loved to hug people. Sports and being outdoors fishing and hunting were big things for him. Golfing, he loved to play baseball, wrestled and he played football. He did it all really.”

Robin said she also likes to donate to local youth athletics with the money the foundation raises from its annual baseball tournament.

For the trophy case, the foundation split the cost with Jackson High School, which used money from winning $10,000 in the Pepsi MidAmerica Yellow Cap Challenge back in December.

At this year’s Parker King Memorial Tomahawk Challenge, the foundation donated Parker’s wrestling shoes, one of his medals and a photo of him in his wrestling attire to be put in the trophy case.

“The trophy case is really big for our team and our program, but what is more important is that we give admiration and respect to Parker King,” Jackson wrestling head coach Steve Wachter said. “We have something that will be in the school to represent him for the lifetime of the school and our wrestling program. He was a really big part of [the program] and a very inspirational part of it.

“For us to be able to one have the trophy case and two to be able to put his picture, shoes and medal in there to me that is the most important thing that we have. We’ll always be able to remember him and see what he contributed to our school.”

At the team’s annual banquet, Jackson celebrated its six state qualifiers, seven Academic All-Conference wrestlers as well as going undefeated in dual meets at 11-0 as well as winning the SEMO Conference Championship. This was the 23rd conference title for Jackson and the seventh in the last 10 years.

The junior varsity squad was also honored for going undefeated in dual meets for a record 27th-straight season, having won 253 dual meets in a row, which is the Missouri record.

Individual awards were also given out as sophomore Alec Bailey was named Most Outstanding following a year where he won 46 matches and earned Class 4 All-State honors at 106 pounds.

Bailey shared MVP honors with junior Braden Vaugier, who was also a state qualifier and finished with a team-high 48 wins, which ranks him 11th all time in the program’s single-season record book.