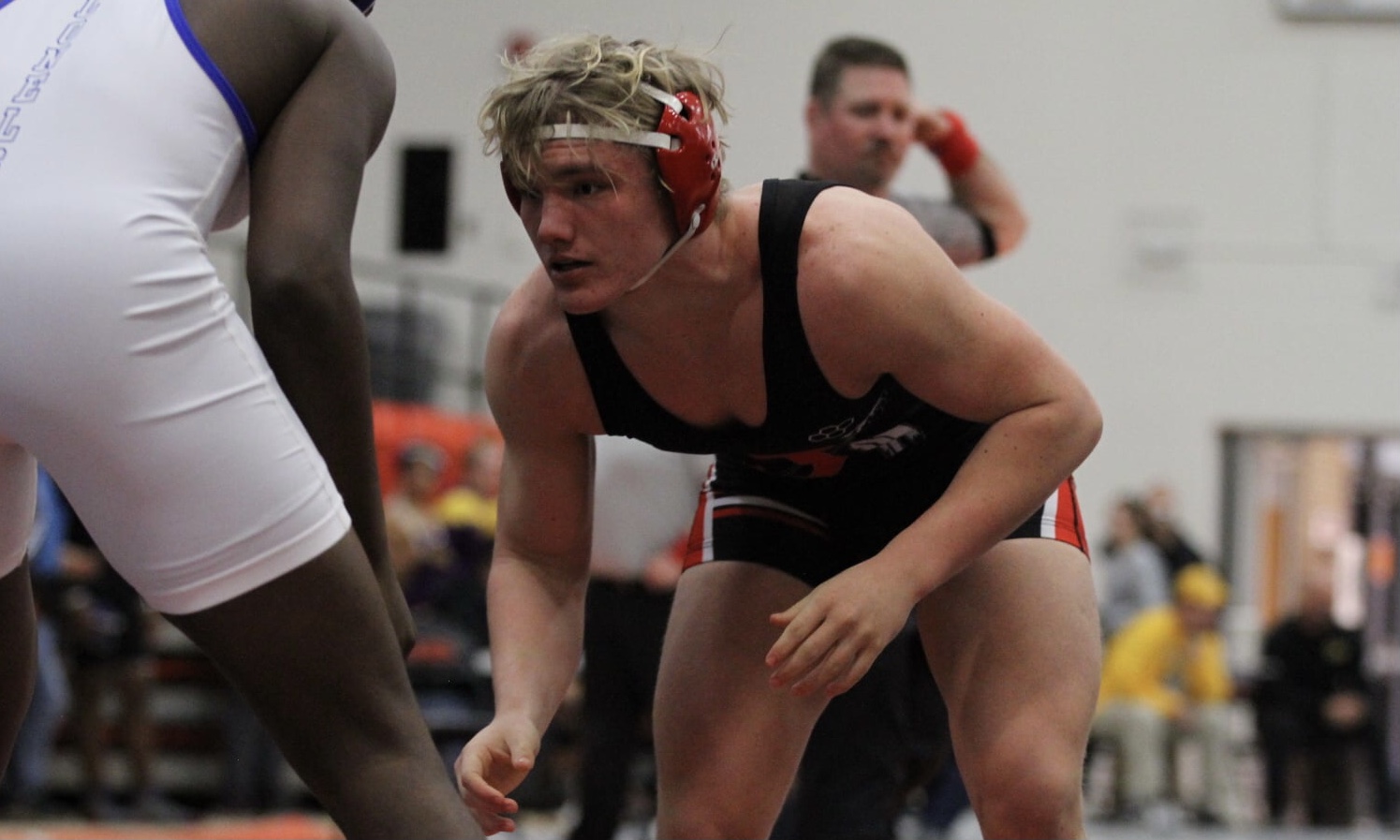 Last winter, the Jackson wrestling program sent a total of eight Indians to the state championship meet as seven were from the boys team and one was from the girls squad.

Two of those wrestlers managed to place in the top six of their respective weight class to garner all-state honors, which was junior Landon Vassalli and 2022 graduate Liam Bryant.

Vassalli, who finished with an overall record of 44-6 last year, placed third in the Class 4 106-pound weight class. Bryant posted a 34-5 record and took fourth as a heavyweight.

Along with earning all-state, Vassalli won his first-ever SEMO Conference Championship and was also a district finalist, where he placed second. Landon is currently 33 wins away from 100 for his career.

“Landon put in a really good spring, summer and fall — he’s trained pretty hard,” Jackson head coach Steve Wachter said. “He has a lot of wrestling savvy. … He’s a very good scramble wrestler, and he has great wrestling feel. You can get kids strong and being mentally and physically tough, but you get in situations where you have this wrestling ability.

“It’s kind of what athletes have and makes them a little bit more outstanding than others. Landon has a very good wrestling feel out on the mat and that’s what gives him an edge.”

At 195 pounds, Beyatte finished with the best among the Indians returning state qualifiers at 42-6 and is the only returner to have won both a SEMO Conference and Class 4 District 1 Championship last season.

Beyatte will be moving up a weight class and wrestling at 215 pounds this season.

“Tyler is very naturally strong and physical — just like everyone else he’s got to stay healthy,” Wachter said. “Last year, he wrestled a lot while being injured and hurt. We are focused on keeping him training hard and focused on his goals.”

Wrestling a weight class below Beyatte at 190 is fellow state qualifier Horman, who went 32-8 overall while earning both all-district and all-conference honors at 182 pounds last year.

Griffin was a conference champion his sophomore year and also qualified for state as a freshman. He only needs 15 more wins to reach 100 career victories.

“The sky is kind of the limit for Griff — he’s not going be a big 190-pounder, but he’s very deceiving,” Coach Wachter said. “He’s very quick and a lot stronger than you’d expect from just looking at him. He’s wrestled a lot and also has wrestling savvy.

“As long as we keep him healthy, I think he could do some great things. Tyler and Griffin are a great one-two punch at the top of our lineup. Hopefully at the end of the year, we can place pretty high on the podium with those two wrestlers.”

As for Hicks, he finished with an overall record of 22-7 while competing at 132 pounds as he will bump up to 145 this season. Gavin, who will wrestle at 144 pounds, was also a conference and district finalist.

One wrestler who nearly reached state last season was junior Jacob Shirrell as he lost in overtime of his district bubble matchup. He will be competing at 150 pounds this year after finishing 19-16 at 138 pounds.

Filling out the rest of the weight classes will likely be freshman Kadon Shaw at 106, freshman Graidy Rice at 120, freshman Kade King or junior Russell Coy at 126, sophomore Jacob Milam at 132, sophomore Matthew May at 138, senior Craig Aufdenburg at 157, either junior Braydon Gates or junior Blake Hager at 165, junior CJ McIntyre at 175 and senior Noah Gibson at 285.

“The biggest thing about these freshman coming in is their work ethic and their attitude,” Coach Wachter said. “They’re like juniors and seniors already with their work ethic — they stay after practice and work on things. “These young kids love it — they bring that energy to the room. So far every day when they’ve shown up offseason and in season, I’ve seen that energy from all those young kids.”

Leading the girls team this season will once again be Metzger after becoming the second wrestler in the team’s history to qualify for state and win a district championship. Mallorie did so last while wrestling at 120 pounds and finished with a of 29-8.
Metzger was unable to finish as a conference finalist, but she did manage to come back and beat every single wrestler she lost to at conference to bring home her first district title.

Jackson’s girls wrestling team did come away with two individual conference champions, though, as one was Mallorie’s twin sister and fellow senior Gracie Metzger (25-9), who won the 115-pound title.

“She’s right there with her sister and it’s the same thing with Gracie — she has really good work ethic,” Coach Wachter said. “She’s getting better at not having hesitation when she wrestles because she would hesitate sometimes. When she does not hesitate, you can see she is a conference champion. She can come out there and get it done, and we have a lot of confidence in her.”

The second and final conference champion for the girls was another senior in Kassie Hodges as she won the 130-pound championship and finished the season with a record of 27-8.

“Kassie has really good wrestling hips and can throw really well,” Coach Wachter said. “She’s a very good live wrestler, but she just has to learn how to drill hard in practice. She’s very talented, and she’s had a good career so far. We want her to finish well and get her on that podium at the end.”

Another Metzger will join the fray for Jackson girls wrestling in Mollie Metzger, who finished with an undefeated season as an eighth grader at 20-0 while competing against boys and girls. Other girls wrestlers for Jackson will be juniors Kaiden Weisbrod, Josephine Collins and Maggie Gibbs. 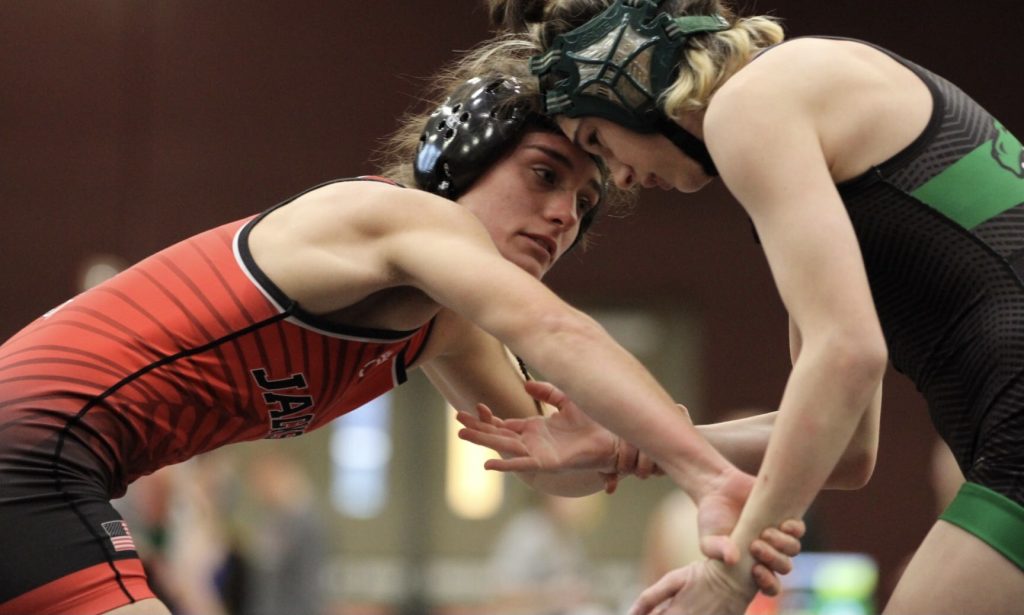