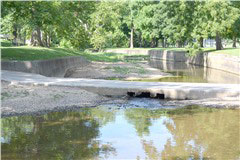 After a 5-year-old girl fell from the low water bridge over Hubble Creek in City Park May 24 and was rescued by an 11-year-old boy, the City of Jackson has sought ways to make the bridge safer.

The City has already installed signs to warn of the danger.

The concrete bridge allows traffic to cross Hubble Creek in the middle of City Park when the creek is low. The creek flows through three metal pipes under the bridge.

When the creek rises above the height of the roadway, it flows over the bridge and motorists are warned not to cross during high water.

Children often play on the bridge or in the creek when the water is low.

When the creek is flowing heavily, there is a danger that children could fall into the up steam side of the bridge and be forced under the bridge through one of the three pipes, possibly drowning. So far, there is no record of that happening, but the May 24 incident has led city officials to consider what options there are to make sure it doesn’t happen in the future.

The first option, which is the most expensive, is to remove the three pipes and put in a suspended concrete slab. This would create more open space under the bridge, but debris could still be trapped against or under the bridge. This option would cost less than $75,000.

A second option is to install grates over the pipes. This will decrease the chances of a child being sucked into a pipe, but a child could still fall against the grate and the force of the water surging past could pin the child against the pipes under the water.

This option also allows debris to collect against the grates. The debris could stop the flow of water under the bridge and force the water to rise over the top.

The cheapest solution is to fill the pipes. It would cost only about $5,000. This would prevent anything from going under the bridge. But that means the creek would always be flowing over the roadway. None of the aldermen liked this option.

A fourth option, which is the safest, is to remove the bridge altogether. This would cost about $10,000. This solution would eliminate all pedestrian and vehicle traffic across Hubble Creek at this location.

Parks and Recreation Director Shane Anderson said the low water bridge is used by park employees who drive their mowers across. He was not in favor of removing the bridge.

City staff will continue to study the matter before making a recommendation to the Board of Aldermen.

• Meeting date change: The Board approved moving the Sept. 7 meeting date to Wednesday, Sept. 9, in observance of Labor Day.

• City collector: The Board approved the mayor’s appointment of Lisa Beussink to the office of city collector.

• Electric relays: The Board accepted the bid of K D Johnson, Inc., of Leonard, TX, in the amount of $48,821 for Schweitzer electric distribution protective relays.

• City Hall reroofing: The Board accepted the bid of Riverside Roofing Company, LLC, of Cape Girardeau, in the amount of $87,064, to replace the roof on Jackson City Hall.

• Conservation Department agreement: The Board approved a contract with the Missouri Department of Conservation under its Community Assistance Program, for cooperative management of Rotary Lake and Litz Park Lake.

• Easements: The Board accepted the dedication of a utility easement deed from Theodore and Vicki Holzum for the South Farmington Road Electric Extension Project.

• Roundabout agreement: The Board approved an agreement with the Missouri Highways and Transportation Commission regarding final costs of the roundabout at Hwy. 61 and East Main Street.

• Roundabout: The Board authorized changes to the Stop Street Schedule,” the “Yield Right-of-Way Streets Schedule” and the “Crosswalks Designated Schedule” in the city ordinances to reflect changes that were made at the roundabout recently completed at Shawnee Boulevard and East Main Street.

• Parking on Missouri Street: During study session, the Board listened to comments of business operators on North Missouri Street between West Main and Washington Street regarding making all the parking on that block two-hour parking. The change was considered to keep courthouse visitors from parking on the street, thus allowing customers to park closer to the businesses.

Some business operators said their customers need to park longer than two hours.

Although parking was a problem when the new courthouse first opened, the County has told employees not to park on Missouri Street and the parking situation has improved.

It was decided that instead of making the entire block two-hour parking, only the parking spots directly in front of businesses would be so designated. Customers who needed to park longer could park a short distance away in front of residences.

The matter was set to come back before the Board for a vote at its July 20 meeting.

• Water line relocation: A representative of Saint Francis Medical Center said a city water line must be moved where a new medical office is being built on East Main Street. The City had planned to replace that 8” line with a 10” inch line within the next three years. Instead of moving the old 8” line, and having to dig up the property again in three years, it was recommended that the line be switched out to the 10” line as it is being moved. The City will pay for the 10” pipe and Saint Francis will pay to have it installed in the new location.

• Fiber installation: Kevin Cantwell of Big River  Communications explained how his company is bringing fiber optic cable to Jackson to improve Internet speeds. “It’s not about getting e-mail faster; it’s about economic development,” Cantwell said. “Everybody needs broadband. Our goal is to deliver it.”

He said his company is currently auditing poles in the city for pole attachment.

“This is an economic engine,” he added. “It’s going to be exciting, what we end up doing.”

• Wastewater: The Board was updated on the Wastewater Facility Plan Implementation Program during study session.

• Mobile vendor permit application fee: During study session, the Board discussed having a $10 fee for mobile food vendors to receive a permit to operate within city limits. Currently the City requires no fees or permits from mobile food vendors, although they do need a business license and must be approved by the health department.