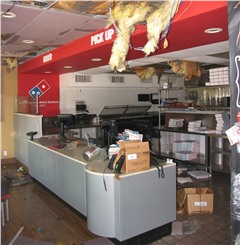 At 4:41 a.m. Friday, Sept. 6, Jackson Fire and Rescue
received a call that reported flames shooting through the roof of the Domino’s
Pizza building at 318 E. Main St. It is believed that a neighbor heard a
strange noise and looked out the window to see the fire, said Deputy Chief Sean
Mitchell.

Five apparatus and 15 firefighters responded from JFR and
the Cape Girardeau Fire Department. Meanwhile, mutual aid was requested from
the Gordonville and Fruitland Fire Protection Districts to man Jackson’s fire
stations during the operation.

When firefighters arrived at Domino’s, they saw flames
burning through the roof in the back of the building. They entered the building
and attacked the blaze, extinguishing it in five to 10 minutes, Mitchell said.

The cause of the fire is not known and is under
investigation. It started in the attic above Domino’s and spread into a
neighboring business, Sander Financial Services. There, the fire burned through
the ceiling and down into a closet in the back of the office.

There were no injuries or fatalities and no one was in the
building at the time of the fire.

Fire, water and smoke damage, plus the loss of electricity
forced Domino’s to discard all food on the premises along with all cardboard
and food containers.

Fritz Sander received a call at home about 5 a.m. to let him
know the building was on fire. He rushed to his office. By the time he arrived,
the main fire was out, but firefighters were still searching for and
extinguishing hot spots.

Sander was forced to move from his office but was thankful
that no files were lost. He believes his only loss (in addition to office
supplies in his closet) was a printer that suffered water damage.

For now, he plans to operate his business out of his home.
Customers can call his office number and leave a voice mail. He will check his
voice mails from home and call them back.

Sander has nothing but praise for the Jackson Fire
Department. He knows things could have turned out a lot worse.

“The fire department did a heck of a job,” he said. “They
deserve a lot of credit.”