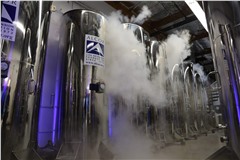 Jackson natives Morgan Johnson and Jake Randall have released a trailer for their documentary about cryonics, The Ultimate Lottery Ticket: Life Extension, with the film planned to be released on YouTube in the next few months.

Cryonics is the freezing of human corpses and heads in liquid nitrogen, with the hope to preserve the body until advances in science can restore them back to life.

The topic is regarded with skepticism within the mainstream scientific community, but organizations like the Alcor Life Extension Foundation have continued to advocate for the procedure and perform cryonics on those who are legally dead.

Johnson said he had known about the topic through pop culture depictions like Austin Powers and “Futurama,” but their trip to Arizona did make him realize that some truly believe in the practice.

“I don’t believe they are people just trying to cheat you out of money,” Johnson said. “It is a really expensive procedure, but I think they honestly believe that one day this will work.”

Johnson said that many of the people who run the facility, including CEO Max More and Co-Founder Linda Chamberlain, plan on having the procedure done after they are legally dead and have had their family members already go through the procedure. The organization has around 1,250 members and has frozen 167 bodies and heads.

The documentary will go over the procedure, as well as the moral and ethical questions that go with it. Johnson spoke to Bruce Gentry, a Southeast Missouri State University religion instructor, for the film to cover the religious implications to cryronics.

While Johnson said it is unlikely cryonics will ever result in reanimation, he did say the future is hard to predict. “I’m a heavy believer in science and education and research, but I would say it’s definitely a possibility,” he said. “I guess that’s my optimistic look on it.”

Johnson said the documentary will end with a discussion with more about what the future would look like if cyronics ever results in life extension.

The trailer for the film can be seen on YouTube on Morgan Johnson’s channel.