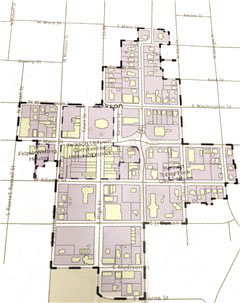 A historic architectural survey of Uptown Jackson has just begun, with a final report expected next June. The survey, completed by RDG Planning and Design, will evaluate the historical significance of buildings and properties in the uptown area.

The survey results will be used to develop a local list of historically significant properties and recommendations from the survey can be used to potentially nominate individual properties or districts to the National Register of Historic Places.

Craig Milde, a member of the City’s Historic Preservation Commission said the survey was three years in the making. “It’s a huge undertaking and will be a win for the City of Jackson to have a historic district really established,” Milde said.

Milde said the commission used the 1812 plat of the city, along with other early town maps to establish the area included in the survey. The survey covers Uptown Jackson with Mary Street being the farthest north the survey goes and the survey going down to the City Cemetery.

Stephanie Rouse, an architectural historian with RDG Planning & Design, said they are documenting every building within the survey area, regardless of its historic nature.

“What we do is we go building by building – taking photographs, making notes on the architectural style and details, and then we do a lot of research,” Rouse said. “We try to get historic photographs of the buildings and put together a narrative history of Jackson from the early days up to present time.”

Janet Sanders, buildings and planning manager for the City of Jackson, said one of the reasons the City chose RDG for the project was because the company will not only complete a report, but also an online “Story Map” where the public can see an interactive summary of the survey results.

The Story Map is scheduled to be launched in May 2021, when another open house will be held in Jackson. The final report will then be submitted in June.

Sanders said the city’s Historic Preservation Commission will use the final report and recommendations to reach out to the property owners about preservation and whether they would be interested in moving forward with local or national historic designations.

“We’ve been fortunate that the people that own the historic uptown buildings on High Street and Main Street have maintained them and not torn them down,” Sanders said. “Every town has their commercial strip that is similar in every town and is needed, but your city’s character comes from your historic area.”

Sanders added that certain properties on the national register can receive tax incentives for rehabilitation, and developing a local historic register will help the city maintain its Certified Local Government status with the state’s historic preservation office.

The Oliver House, the Frizel/Welling House and an Uptown Jackson Commercial Historic District are already on the National Register of Historic Places. The three areas were still included in the architectural survey, despite already being on the national register.

Rouse said if someone was not able to attend the open house but has information or research on a building in the survey, they could reach out to her through e-mail at srouse@rdgusa.com.