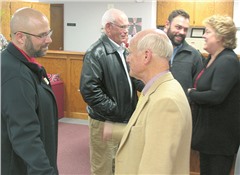 Aaron Harte of Incite Design Studio updated the Jackson R-2 Board of Education regarding plans to add onto and renovate four school buildings if the April 4 bond issue request passes.

“The broad strokes are in place,” Harte said. However, changes can still be made in the plans.

At North Elementary, five regular classrooms and two kindergarten classrooms will be added. Future plans include a new gymnasium as well. The administrative area will be moved, and the special education area and media center will be expanded.

Four classrooms will be added to West Lane Elementary. A FEMA grant is expected to pay for a safe room (storm shelter) that will double as a gym, art  and music rooms, and four kindergarten classrooms.

One of the pods will undergo extensive renovation.

In addition, the driveway will be moved and expanded to facilitate student drop-offs and pickups. The goal is “to get vehicles off Oak Street,” Harte said.

A longer driveway and more parking will be added.

“We want to pay homage to what was there,” Harte said. He presented an artist’s rendering of what the new freshman center could look like. At the bottom are dark bricks to match the rest of the high school; the upper bricks are light colored, and along with the tall vertical windows, are designed to represent the look of the old “A” Building. All plans are still subject to change.

Signs with infographics were to be installed by the end of last week at each building to describe the planned improvements and give an artist’s rendering of those improvements.

For more information on the bond issue and these improvements, see the story on page 5D.

• AT&T appeal: The Board gave the go-ahead to fight AT&T’s legal appeal to cut the taxes it pays on its cell towers.

• Jacob James recognized: Jacob James, a fifth-grade teacher at North Elementary, was recognized by the Board for being named an MATCE Outstanding Beginning Teacher.

• STEAM & Mindstorm: Presentations were given to the Board on two after-school clubs at North Elementary: STEAM Club (students interacted with Board members, helping them to build an LED light that flashed) and LEGO Mindstorm, where students demonstrated a LEGO robot they had built and programmed.

People will gather on the courthouse lawn to read books. There will be a book swap, guest readers (including the Cat in the Hat) and story tellers. There will be something for everyone and all ages are invited. It is an opportunity for the librarians to reach beyond the school system and into the community.

If the weather is bad, the event will be moved to the Civic Center.

• Good-bye to Tomlin, Lewis: Board President Terri Tomlin, who has served on the Board for 15 years, and Board member Dr. T. Wayne Lewis, who has served for 30 years, were honored for their service.

“Thank you for your leadership for the past 15 and 30 years,” said Superintendent Dr. John Link.

Summarizing the progress in the District, Lewis quipped, “We are where I thought we would be.”

• Next meeting: The Jackson R-2 Board of Education meets regularly for open session at 7 p.m. on the second Tuesday of each month at 614 E. Adams, Jackson. The next meeting is scheduled for Tuesday, April 11.