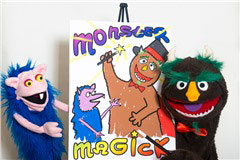 This summer’s theme, “A Universe of Stories,” has resulted in a summer packed full of reading and library programs for children and youth at Riverside Regional Library branches. That is really nothing new, but Alynda Smithey, children’s/youth services librarian, commanded her new position with 540 patrons signed up for summer reading; 250 have completed the summer reading challenge. The official deadline to return reading logs was Aug. 14.

Smithey is a Jackson native who attended Jackson High School and is also a graduate of Southeast Missouri University. Prior to this position she worked at the RRL Perryville Branch as assistant branch manager and as a circulation clerk at the Jackson branch.
“I am proud to instill my knowledge and passion for guiding youth to new experiences and how reading can make a positive impact in their lives,” said Smithey.
She has served on the Jackson Community Outreach board for more than six years and strives to make a positive impact on the community with her involvement.
“Being involved in my community, I continually look for ways that can enrich the lives that I encounter on a daily basis,” she said.
“A Universe of Stories” blasted off in June with library patrons attending Mad Science of St. Louis where they learned what it’s like to explore space and the space technology used on earth today. Children at library branches tried on astronaut helmets and moon shoes and then tried to walk with balloons on their arms to simulate what it would be like in space. Programs that followed included making a moon rock and engaging in a little competition with paper airplane races.
The library slime making program went to a higher level because it was galactic. Making the gooey product has not been part of our culture as long as paper air plane making, but with the trend remaining so popular, it is likely the program will be on the calendar again.
This summer’s library exercise program, “Train like an Astronaut” imitated some of the physical challenges of being in space like using a giant glove to pick up tiny puzzle pieces or rocket shooting through a hula hoop. Scott Givens, HealthPoint Fitness manager, led small astronauts in space-themed activities and exercises.
The Southeast Explorer bus from Southeast Missouri State University visited the library with a “Man on the Moon” program celebrating 50 years since Apollo 11. Programs following included space and flight cookie decorating and a scavenger hunt.
On Thursdays at 9:30 a.m., Sandy Crites, brought her granddaughter, Chloe Nenninger, to the Jackson branch to read to Solo the dog.
“She doesn’t have a dog and he’s well behaved,” said Crites. Chloe, who is in fourth grade, said, “I’ll be missing one day because I’m going on vacation.”
In July, Glen Foster, comedy magician and illusionist based out of Orlando, FL, entertained and interacted with children and adults alike. A performer on Disney cruises, Foster rocked the house with 210 people at the Jackson branch, the highest among the branches.
The library became a menagerie in that same month with Lazy L Safari visiting the branches. Perryville had the highest number in attendance with 337 people.
“Monster Magic” with Jeanie Puppets, another hit program, featured a puppet show by touring puppeteer Jeanie Bryan, a storyteller and puppeteer based in St. Louis.
Smithey said, “I am excited for September, with it being National Library Card Sign Up month. The theme this year is Toy Story 4. We have some fun activities planned.”
A Christmas music program with Brian and Terri Kinder of Kindersongs is planned for December.
In the meantime, find a book, strike a pose and create your book face photo. Bring it to Riverside Regional Library in Jackson for a chance at becoming one of three finalists, announced Sept. 6. Voting ends Aug. 31. Visit www.riversideregionallibrary.org/2013-04-11-21-55-13/jacksonprograms for more information.
In this article: