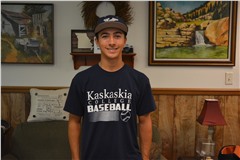 Hunter Bilek may have had his senior year of baseball at Saxony Lutheran taken away from him this spring because of the coronavirus pandemic, but his playing days are far from over.

After helping lead the Crusaders to their first-ever Class 3 Final Four appearance in 2019, the all-state second baseman will continue his playing career at Kaskaskia College in Centralia, Illinois.

Bilek’s baseball career began at around four or five-years-old when he joined the first league he could, which was tee ball. He instantly fell in love with the sport once he started playing and by watching the St. Louis Cardinals.

Something that Bilek loves the most about baseball is the competition because even all-time greats like Babe Ruth or Willie Mays only experienced success three out of 10 times on average. Bilek is also fond of the brotherhood he creates with his fellow teammates and coaches.

While visiting Kaskaskia’s campus, Bilek said he clicked instantly with the players and coaching staff since he was able to practice with the infielders a little bit. Bilek also said the school is smaller and out in the country, which reminds him of Saxony.

Another main reason why Bilek decided to sign with Kaskaskia is because of the coaching staff’s mentality when it comes to who starts on the field, which is no matter what year a player is in, the best player plays.

This is the same way Bilek had a successful high school career with Saxony because the Crusaders 14-year head coach Paul Sander put Hunter in the starting lineup his sophomore year.

“When I went for my visit, the [Kaskaskia] coach said, ‘The best guy plays,’” Bilek said. “Whenever the spring season came around before it got canceled, I went to a doubleheader and they only had two sophomores starting — all the other ones were freshman.

“Playing at Saxony was great because I’ve played for [assistant] coach Mark Lewis for many years,” Bilek said. “Coach Sander reminds me a lot of how Kaskaskia’s coach is — the best guy plays. If you work your tail off, you’re going to earn a spot. It was just like a family at Saxony.”

In Bilek’s first year as a starter at Saxony, he finished with a .255 batting average along with recording 14 runs, 12 hits, nine runs batted in and nine stolen bases.

It’s safe to say he more than improved on those totals his junior campaign as he became the Crusaders leadoff hitter. Bilek recorded the team’s highest average at .414 and also led the Crusaders with 37 runs, 36 hits, three triples and two home runs while finishing second in stolen bases at 21.

On top of being the Class 3 third-place finishers last year, Saxony came up with the most wins in program history at 23-4 overall that consisted of two 10-game winning streaks and brought home a district championship for the first time in a decade.

“I was able to work my way to the top of the lineup because of my ability to get on base, and I have some speed,” Bilek said. “Once we made that change to me batting first instead of second, we went on our run where we won 20 of 21 games, so I feel like that new lineup helped us find our chemistry.

“[Last season] just felt like destiny because we had to go through two walk-offs in sectionals and quarterfinals, and then the district championship game was back and forth. There was an exciting feel to the game that got all of your adrenaline running, and we were able to come out on top.”

As Bilek said, the road to the Class 3 Final Four was certainly no walk in the park for he and the Crusaders as they did not win a game before state by more than two runs following the district semifinals.

Saxony defeated Scott City 10-8 for the Class 3 District 2 title as Bilek recorded an RBI single in the game, and he arguably had the best performance of his high school career in the next game against Malden in sectionals.

In extra innings, the Crusaders beat Malden 9-8 with a walk-off single by 2019 graduate Austin Fritsche in the same game Bilek was able to hit the highly sought after cycle. Hunter had a homer in the first inning, double in the second, triple in the third and finally a single in the ninth while driving in five runs and scoring two of his own.

“It was crazy because we were in Malden for the sectional game, and I got three at bats in the first three innings,” Bilek recalled. “Without that performance, I don’t think we would’ve been able to win that game, so it was a great feeling to be able to help my team win.”

Saxony was then supposed to host the quarterfinal game against West County, but it had to be moved to Ste. Genevieve’s turf field because of a storm that hit the night before. The Crusaders were still able to beat West County 7-6 to advance to state as Bilek hit a solo homer in the contest.

In the state semifinals, Saxony fell to Class 3 runner-ups Fatima 14-2 but ended the season with a 9-1 win over Montgomery County in the third-place game. Bilek tied for a game-high three hits and scored one run in what would be the final game of his high school career.

“[Losing my senior year] was heartbreaking and surreal because it still doesn’t feel real with all the stuff going on in the world,” Bilek said. “We had a good shot of going back to state, but I know I probably played my best season my junior year. I can just look back and think, ‘I had a pretty successful high school career.’”

Even though Bilek and the rest of this year’s senior class missed out on a 2020 season, they were still able to play three times together on their home field. Saxony hosted a intrasquad doubleheader on June 11 followed by an alumni game June 27, and the Crusaders varsity squad went 3-0 in these matchups.

“Mason Lewis and I go the furthest back — we probably started playing sports together in second grade,” Bilek said. “Jack Foeste played on the same travel team with Mason and I when we were little, so us three have known each other the longest.

“I’ve played against Ethan since we were younger, and he’s gotten a lot better. We’re really going to miss us four and the rest of the guys. Was a great feeling to play with them again.”