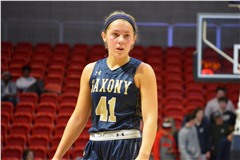 With hopes of winning a seventh-straight district championship and reaching the state final four for the first time in three seasons, the Saxony Lutheran girls basketball team was ranked fifth in Class 3 by the Missouri Basketball Coaches Association last week.

The Crusaders (14-2) recently won the consolation bracket in the Dragon Fire Invitational, a tournament held in Memphis, after winning the annual First State Community Bank Holiday Classic for a second-consecutive season.

The tournament was held from Dec. 27 to 29 and Saxony had nearly two weeks of rest before facing Woodland on the road last Thursday. The Crusaders beat the Cardinals handedly 61-22.

“I think we looked sluggish [against Woodland], but I think we’re really playing well together, which is the key,” Saxony head coach Sam Sides said. “We complement each other’s skills a little bit — we are not very big, but we are athletic.

“As a whole I think we’re doing better than I anticipated really as far as how we’re playing. We still have plenty of room for improvement.”

Leading Saxony this season has been none other than junior Emma Brune, who is currently averaging 20.6 points, four rebounds and 3.1 steals per game.

Brune is also only 32 points away from becoming the fourth Lady Crusader in program history to score 1,000 points. She put up 23 in Saxony’s win over Woodland, so she would need to tie the program’s single-game scoring record of 32 against Oran to reach the mark.

“She’s always been a pretty good player, but she’s gotten really better,” Sides said. “This year she took more of a leadership role and took more of a point-guard attitude about getting us in the right offense.

“When her outside shot is going along with her ability to get to the basket — she’s tough to deal with. The only thing that hurts her is her lack of size, but she’s strong and aggressive.”

It was somewhat natural for Brune to step up as this team’s leader since she was the only returning starter from the last two seasons.

“I’ve definitely gotten more vocal than I used to be,” Brune said. “I used to be super quiet, and I’m starting to get out of my comfort zone so it’s getting a lot better.”

Something Brune pointed out as one of Saxony’s keys to success so far is that it isn’t just five players winning games but that everyone on the bench is contributing.

Brune is spot on with that statement as junior forward Olivia Spanley proved this point by scoring 51 points and coming down with 23 rebounds off the bench in substitution of senior Bri Jenkins through four days at the Dragon Fire Invitational.

“[Olivia] has struggled a few times throughout the season, but down [in Memphis] she really made a difference,” Sides said. “She can get to the rim, and she’s got size and length to her. She had a couple really good games down there not only scoring wise but on defense and rebounding, too.”

To start the tournament, Saxony defeated Craigmont 74-38 as Spanley nearly recorded her first double-double with 12 points and nine rebounds. Brune scored a game-high 27 points while senior Cass Wunderlich and Jenkins combined for 25.

The Crusaders then fell to Memphis Central 52-51 in overtime of the quarterfinal round as Brune was held to five while Spanley only scored one point.

Senior Macey Smith finished with a team-high 13 points as junior Makayla Mueller paced her with 11.

Saxony responded with a 35-point, 66-31 win over Memphis Academy of Health Sciences the following day to reach the consolation championship game. Spanley scored a team-high 21 points while Brune had 17 followed by Mueller at 14.

“Makayla is fairly quick — she’s not really fast, but she’s quick,” Sides said. “She can guard people, she can handle the ball, she can make passes and she makes good decisions. She probably knows the game as well as anybody on her team as far as knowing what to do and how and when to do it.”

The Crusaders defeated Hernando 55-50 in overtime to win the consolation bracket as Brune amassed 20 points once again at 23. Spanley paced her with 17 points as both players came down with six rebounds.

“Three of them were Memphis city schools, and most of the teams had more size and more speed, but I felt like we probably had better ball players than they had,” Sides said. “Memphis Central had some good size. We had that game late, and we just couldn’t hang on at the end. We missed a couple free throws and missed a shot at the buzzer and still could’ve won the game.

“That’s why I went down there — for us to get some tougher competition. The last team we played was also pretty big and athletic, but that game was a struggle.”

The Crusaders return to SEMO Conference regular-season play against Cape Central Thursday night and will then face Dexter to try to avenge a 28-point loss in the conference tournament Jan. 28 at home.

Saxony won last year’s regular-season title after finishing 6-1 as the team’s only loss came to Jackson at 53-40. The Indians finished with two losses, one to Dexter and the other to Poplar Bluff.

“It’s going to be tough [to win it again] because I think there’s a lot of balance,” Sides said. “I think Dexter is the favorite even though Jackson beat them. Jackson’s size and Dexter’s size will give us trouble and Notre Dame is playing as well as anybody. Most of our conference is bigger and helps us get ready for districts.”