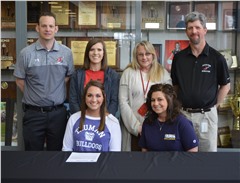 Jackson senior Margo Motes first thought about attending Truman State for its biology program, but she also realized she had a chance of being an athlete there as well.

Motes talked to Truman State’s cross country and track and field coach about continuing her career as a runner. She was given times to hit, which she was able to do this year to earn a scholarship.

As a junior, Motes was a part of the first-ever state championship cross country team at Jackson as the girls won the Class 4 race with a 134. Motes finished 162nd with a time of 22 minutes, 17.07 seconds.

This season, only two runners from the girls team qualified for state. One was junior Kennedy Bauer and the other was Motes, who finished 77th overall with a time of 20:41.17.

“Over the summer after my junior year I was like, ‘All right, I’ve got to get serious about this — I’ve got one more season,’” Motes said. “At that point I was like, ‘Well, maybe I can do it. Maybe I can get better and run for a school.’”

Motes accomplished her goal by working out the entire summer and running the miles she needed to.

Heading into college, Motes does not know what her workouts will entail just yet, but she is going to continue to work in the summer to try and prepare herself. She will do this by upping her mileage to get her times down while also putting time in the weight room.

The reason why Motes is pursuing a degree in biology with a focus in medicine is because when she was younger as a gymnast, she suffered a few injuries and had to be in hospitals from time to time.

When she isn’t running or in the classroom at Truman, Motes will also continue doing community service work.

Motes said she is certainly going to miss the relationships she has made here at Jackson as she describes her teammates and coaches as “a little family.”

“I know these teams will do really, really well once we leave,” Motes said. “We have some really good leaders under us, and so they are ready to take that next step and lead the team. I’m really excited to see where they go.”

Throughout her high school career, Motes’ cross country head coach has been Andrea Talley while Jim Stoverink Jr. is at the helm of the track and field program.

“Coach Talley is there every single day pushing me even when it was hard,” Motes said. “She is always looking out for me, and she is just a really, really great lady to have as a coach. Coach Stoverink always reminds me to run with courage and confidence in every single race. I’m going to miss him a lot.”

Coach Stoverink said having Motes on his team is also like having another assistant coach. He also said she is a model of what athletes can do when they have a great work ethic and are coachable.

“In 24 years of coaching, I don’t know if I’ve ever coached anybody that has more grit and determination,” Stoverink said. “She beats runners that are faster than her because she wants it more than they do. She’s willing to make it hurt more, and I’ve probably never coached somebody that is that tough, who can go and do that meet after meet after meet.”