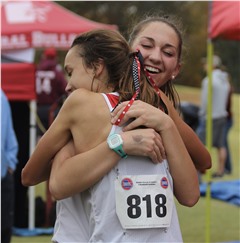 Saxony’s boys team was the only one to compete as a whole instead of individuals, finishing ninth overall in Class 2 with junior Caleb Cornelius winning the race in 16 minutes, 22 seconds.

Class 2 State Champion Cornelius was the only Crusader to earn all-state honors in the race as Saxony’s next runner to finish was senior Nolan Brown in 84th place at 18:43.

“Kennedy ran the type of race that we knew she was capable of all season her second mile was the key,” Jackson head coach Andrea Talley said. “She was able to pick off runners in the second mile. The final mile, the hilliest, she was able to maintain her position for the most part. To be all-state as a junior now gives her much to shoot for in track and as a senior both as an individual and as a team.”

“Margo ran strong the entire race. She was on a mission and she ended up placing higher than her ranking,” Coach Talley said. “She has had a great season overall and ran stronger each race of the year. Margo and her leadership abilities and mental and physical strength definitely leaves big shoes to fill next year.”

Senior Ean Buffington was once again the only runner on the boys side for Jackson in Class 4 and finished 39th overall with a time of 16:41.

“Ean definitely went with the early fast pace that the top runners set, and on that hilly of a course, he paid the price in the final mile,” Coach Talley said. “But he left nothing on the course — that’s for sure. His finish at state was off of his 15:53 time set this year, but he has had a tremendous season. I can’t remember a male runner in Jackson having the results that he has had this year or over a four-year career.”

For the Notre Dame girls, it was senior Alaina Baum-gart earning Class 3 All-State honors with a 14th-place finish at 20:04. Baumgart finishes her high school cross-country career having earned all-state honors each season.

On the boys side it was sophomore Blake Morris and junior Benton Keran placing in the top 10 at eighth and ninth respectively for each to earn all-state recognition.