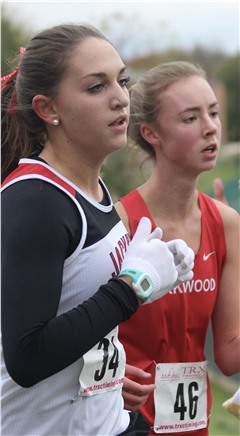 Two of the runners who will be competing at state for the Indians come from the girls team while only one member of the boys team will be representing Jackson.

Junior Kennedy Bauer took 12th place with a 19-minute, 50-second finish as senior Margo Motes finished 27th overall at 20:14 in the girls race for both to advance to the state capital.

Motes’ performance at sectionals was one of the “gutsiest” head coach Andrea Talley has witnessed in many years.

The winner of the girls race was senior Mikayla Reed out of Washington as she crossed the finish line at 18:48.

“When low 20s are the cut off for state you can see the talent level in Class 4, and especially Sectional 1 in our state,” Coach Talley said.

Junior Faith Littleton was 6 seconds away from qualifying as she finished in 33rd place with a mark of 20:25. Fellow junior Kaylee Wilson, who was all-state last year, took 50th place with a time of 21:05.

“Kaylee ran an improved meet for as few races that she ran this season,” Talley said. “This was outstanding for her.”

The final three runners for the Jackson girls were able to finish in the Top 70, and two of them were freshman.

This is the second-straight year where Buffington will be the only runner for the boys team to compete at state. He finished 47th overall with a time of 16:29 in last year’s state meet.

The next runner to finish for Jackson after Buffington was senior Gage Kinder, who took 41st place at 17:32.

“Gage has had a tremendous season for us — both as an athlete and as a leader,” Coach Talley said. “He has been incredibly tough minded and his will to win and lead the team is unmatched.”

The final five runners for Jackson will all be returning next season as freshman Dylan Alexander finished third for the boys team in 61st place at 18:06.

“We have two very young teams, so this sectional meet was a valuable experience for the future,” Talley said. “It was an eye-opening experience for our new runners, but now they know how much they need to do over the offseasons and track season to reach the state level.”