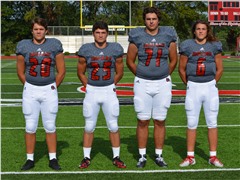 The Jackson football team recorded one of its best seasons in
program history last year by going undefeated in the regular season and winning
both the SEMO North Conference and Class 5 District 1 Championship.

The Indians had six players garner all-state honors following 2018
as four of those players, who are all juniors, return this year.

Several all-district and all-conference honorees return for the
Indians as well with junior inside linebacker Bryce Norman and junior wide
receiver Rhet Liley being named to both teams.

“I’m very excited in the fact that not just that guys are
returning, but the guys who are returning are better than they were last year,”
Jackson head coach Brent Eckley said. “It’s one thing if you’re returning guys
that are average or not very good or really hungry to improve. It seems like
the guys we are returning have all raised their level.”

Jackson has a total of 14 starters coming back for a team that
averaged 47.5 points per game and finished with five shutouts.

Offensively, getting back two all-state players in the backfield
like Welker and Dickerson is something that Coach Eckley prefers more than
returning skilled guys at wide receiver or several offensive lineman.

Welker took over the starting quarterback position as a sophomore
last season, throwing for 3,110 yards and 42 touchdowns with a completion
percentage of 66.3 on 294 passes. He threw eight interceptions but did not
fumble the ball once on his 110 rushing attempts for 638 yards and seven
touchdowns.

Welker was rightfully named the best quarterback in Class 5 by
being listed on the first team, and Coach Eckley knows his signal caller is
trying to become greater each week.

“In June and July there were some times [Welker] just carried us
when we did team camp stuff,” Coach Eckley said. “He’s night and day better
than he was last year at the beginning of the season. He is physically faster,
he is stronger and the game has really slowed down for him. There’s some things
he can really manipulate throughout the game to really do a good job. He’s also
making really good pre-snap decisions.”

Dickerson rushed for 1,378 yards and 22 touchdowns on 164 carries,
while also coming down with 18 receptions for 205 yards and a touchdown.

“I don’t know that I’ve had a time where two guys that were
all-state returned in the backfield,” Eckley said. “I can’t think of a time
that it’s happened. Both of them are better and there’s a lot of confidence
there.”

Continuing to complement Dickerson out of the backfield this season
will be junior Dimechi Herring, who will also start for the second-straight
year at cornerback.

Herring ran for 318 yards and three scores off 46 attempts in 2018
and also had five catches for 78 yards and two touchdowns. Defensively Herring
came up with 19 tackles, two pass deflections and one forced fumble and fumble
recovery.

“I tell our guys you have to be a dog if you’re going to play both
sides for us because it’s a lot snaps, it’s a lot of work and it’s a lot of
discipline,” Eckley said.

Two other players on varsity will hope to play both ways this
season as well in Waters at wide receiver and corner back and sophomore wide
receiver/safety Blake Blackman.

Accounting for a good amount of Welker’s passing totals last season
was 2019 graduate Jordan Kent, who broke his own receiving records in 2018 with
1,498 yards and 28 touchdowns on 76 catches.

Other receivers who will be in the mix at receiver is Starzinger,
Blackman and finally sophomore wide receiver Kannen Turley. Starzinger has made
three position changes on varsity since he was first an outside linebacker and
then a running back last year.

“They all want to be the guy, but they’re unselfish,” Eckley said.
“They’re rotating on the field really well — it helps us depth wise. No one is
pouting and they are all contributing. We haven’t had guys who have been like,
‘Oh, you’re cheating me. I’m not getting touches or getting looks.’”

Leading the offensive line will be none other than Tollison, who
currently has two offers to play college football from ranked teams in the
Football Bowl Subdivison and Football Championship Subdivison. The two-year
starter was first offered by FCS No. 18 Southeast Missouri State followed by
FBS No. 21 Iowa State this summer.

“Connor is about 30 pounds heavier than he was last year — he’s a
big man [6-foot-6, 285 pounds],” Coach Eckley said. “There’s a lot of good with
him, and he’s getting more recognition from colleges.”

Tollison, who was named the SEMO North Conference Offensive Lineman
of the Year, and Harrison are the only two returning starters to the offensive
line. The Indians lost all three of their interior lineman including center,
which Coach Eckley sees as one of the most important positions on a team.

Junior Thomas Ruch converted to center from quarterback over the
offseason, who Eckley has been impressed by thus far. Battling to fill the
guard spots are sophomores Ashton Flinn, Liam Bryant and junior Cameron Byrd.

All of these linemen are taller than 6-foot and weigh between 230
to 285 pounds, which was something Jackson struggled to have during Eckley’s
first few years at the helm.

“My first year our center weight about 195 and one of those first
three years we had a tackle who was 195 and had to eat like heck to get there,”
Eckley said. “We literally had a center who was in the 170s. We’ve been there
where we’ve been small and had to really work our tail off to go get it.”

Defensively, Jackson only allowed 81 points during the regular
season and then 92 in the playoffs (69 against eventual state champions
Vianney). The unit returns a total of seven starters from last year, which
accounted for 136 tackles for a loss, 37 sacks, 26 pass deflections, 15 fumble
recoveries, 12 forced fumbles and three interceptions.

“I felt like the difference in last year’s team versus other teams
that I’ve coached here, that group last year just had a lot of spunk in them,”
Coach Eckley said. “If somebody got a yard or if one of those guys got beat,
they were ready to fight. They didn’t want to be known as the weak side of the
ball on our team. I see that same thing this year.”

On top of earning all-state honors, McDowell was named the SEMO
North Conference Defensive Player of the Year. He recorded a team-high 169
tackles, 29 tackles for a loss and tied for the second most sacks with seven
while coming off the edge.

Joining him back in the linebacker corps will be Norman and Pike on
the inside. Norman finished second in tackles behind McDowell with 154 while
also having 19 tackles for a loss, four forced fumbles and three sacks.

“Between [Norman] and Randol it was like 1A, 1B and were really
close to both being all-state guys,” Eckley said. “He might have had the best
offseason of any kid that we’ve had. He’s really developed and grown — he’s
trained super hard and he’s running hard.”

Pike finished with 97 tackles and produced 14 tackles for a loss
while finishing third in sacks for the Indians with six.

Koenig produced 119 tackles, 21 tackles for a loss and tied
McDowell for second most sacks with seven. He also served as one of the team’s
leaders, who was unable to play football his junior year due to a severe
concussion.

Moving to outside linebacker from safety to fill the spot will be
junior Garner Horman, who earned all-state honors for the wrestling team last
winter. He made 25 tackles and one tackle for a loss last year.

“Garner Horman has had an outstanding offseason,” Eckley said.
“He’s picked up what we need from him defensively, and he’s been super
physical. He’s disciplined and tackles really well, so we think he’s going to
be a really good fit there.”

Returning to the defensive line at one of the end spots will be
two-year starter Amelunke, who recorded 96 tackles and 19 tackles for a loss
along with four sacks and two fumble recoveries.

Filling the other defensive end spot left by Justin Singleton, who
recorded a team-high nine sacks, will be senior Bret Meyer, who finished with
41 tackles, three tackles for a loss and one sack in 2018.

Returning to start at nose guard will be junior Zane
Lawrence-Collier, who only managed to record 23 tackles and one tackle for a
loss in his first year. However, he demands a double team from the offensive
line, which frees up linebackers to swarm to the ball.

Starting at cornerback opposite of Herring is senior Markiese
Jones, who came up with two pass deflections and one interception.

The biggest return to the defensive back unit is Craft, who
recorded a team-high two interceptions with five pass deflections. He also had
68 tackles and will be joined by fellow senior Grant Sides.

“Caleb is continuing to get bigger,” Eckley said. “He’s a really
big, long rangy safety, and he’s got pretty good top end speed. He covers
ground and is physical back there.”