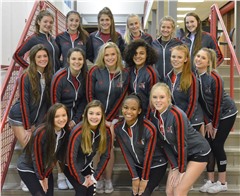 No athletic program in Jackson history has ever won back-to-back state championships, but that all changed as the Indians cheerleading squad won the Class 4 Small School State Championship for the second year in a row last month.

“[Being the first back-to-back state champions in school history] is nice,” Jackson senior Brielle Blackman said. “2019 here we are. We are the cheerleaders, and we can do something. … We even practice at games because we’re doing our stunts during the football games.”

Jackson did so after facing much adversity throughout the season with multiple injuries, which included a concussion, ankle sprains, a dislocated shoulder and an ACL tear. The Indians also failed to take first in the regional meet by placing fourth.

“That one really made us work a lot harder because we didn’t like losing, so I think that put the spark in us to do even better and try even harder than we already were,” Senior Larissa Bell said. “It’s hard to win once, but it’s harder to win twice.”

On top of all the injuries this team faced, the pressure of repeating as state champions was also there and especially for this senior class.

“It was very scary to walk in, and you know everyone is looking at you,” Senior Kenya Tuggle said. “They are like, ‘Are they going to do it again? Are they as good as they were last year?’ I was scared — cried a little bit, but overall it was a good experience, and I think it helped us as a team bond together.”

The lone cheerleader to earn all-state honors for Jackson this year was senior Gracie Ballance as a flyer, and she said being a reigning state champion and wanting her school to “appreciate us” made the team work harder.

“I was bawling [after we won this year],” Ballance said. “I’ve cheered all my life in competitive cheer and school cheer — it was going to be wasted if we didn’t win. I do plan on cheering in college, but this was my high school team.”

Jackson head coach Jana Scott said what most people do not understand about state cheerleading is that it is a three-minute routine that consists of stunting, tumbling and jumping — not just cheering on the sideline at a game like many witness.

“It’s a routine they have to be physically conditioned for, and we worked on this routine for six months,” Coach Scott said. “We only do it twice — we do it once at regionals and once at state. Other teams have every week to perform and see what they need to get better at — we had one shot to do it at regionals.”

The reason Jackson only managed to place fourth at regionals was because of deductions the team received, which Coach Scott and the rest of the team described as a blessing since it pushed them to improve for state.

One side of the team’s pyramid at regionals came completely down to ground and touched the mat, which is considered “a major fall.” The Indians were deducted five points for this.

Jackson lost seven more points because of cheer-leader’s hands touching the mat following tumbling passes, which is a one-point deduction each time. Had the team not received these deductions, the Indians would have won regionals.

After regionals, the Indians decided to basically change their entire routine for the state meet after what they saw from opposing squads at regionals. Jackson added four more practices between regionals and state that weren’t originally scheduled.

The two things that remained the same in their routine was the pyramid as well as the team’s dance. Coach Scott said the pyramid fall at regionals was a fluke since it had never fallen before.

Jackson finished with zero deductions as well as a much higher score at state, and Scott attributes a lot of the success to Melanie Wissore of Athletes Plus Cheerleading Training Center.

“[Wissore] has been with us from day one to help us with this routine and the choreography, and she has just poured her heart and soul into this free of charge because she loves these girls,” Coach Scott said. “She and I looked at the score sheet [from regionals] and saw where we needed to work.”

Jackson only won last year’s state championship by one point, but this year they took this year’s title by seven after losing by seven at the regional meet. The Indians finished in the top four scoring among all five classes.