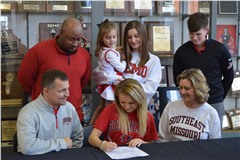 Welker, now a senior, officially signed her National Letter of Intent with Southeast last week on Feb. 8, the day after National Signing Day due to Jackson being closed Feb. 7 for inclement weather.

“I just feel like where I wanted to go was always a pressure [situation], so I just wanted to get it off my chest,” Welker said. “I think I always knew all along I wanted to go to SEMO. Just making the decision was kind of a big deal.”

Welker said it was an easy decision to choose to go to Southeast, especially when the recruiting process started as she met with coaches and visited the campus.

As a member of Jackson’s soccer program, Welker has started all three years on the varsity squad, helping lead the Indians to two Class 4 District 1 Championships (2015, 2017).

The first title was when Welker was only a freshman, but on the team with her were current Southeast women’s soccer players Jordan Nelson and Cassidi Tomsu.

Welker said she is excited to reconnect with them on and off the field since they have all been busy with soccer and academics and haven’t had much time to communicate.

She is also excited about being able to play for a program like Southeast’s soccer team that has claimed five Ohio Valley Conference Championships since its inception in 1999.

There has only been one head coach for Southeast since the program began, which is four-time OVC Coach of the Year Heather Nelson.

“I think [Nelson] is super awesome,” Welker said. “She and the rest of the coaches are a huge reason why I’m going to SEMO. They make me feel so wanted there, and that’s really all that I want is to be wanted somewhere. That’s a really awesome feeling to have going into college.”

Welker first credits her teammates for her success on the field as they are always pushing her. She then talked about her coaches who always push her to be a better player as well as a leader.

“[Welker] is a player that leads by example in a lot of different ways — she is a great person and a great teammate,” Jackson girls soccer head coach Justin McMullen said. “As a coach, you can’t ask for a better player to be a  part of your program for four years. To be able to bring that type of success even as a freshman and continue that as a senior is pretty special.”

Coach McMullen said he and Welker talked last year before she committed to Southeast, saying that she was always impressed by Southeast’s program and the coaching staff.

At first, Coach McMullen was at a loss for words when asked about what it’s been like to have a player like Welker on his team. He then described the type of player she was.

“Certainly someone like [Welker] who sees the field and draws a lot of attention and is still able to score that many goals — she’s just a special player,” McMullen said. “She makes her teammates even better, so it’s really exciting to be able to coach her for another year.”

Heading into her final season at Jackson, Welker said she can’t wait to see what she and her teammates can do and how far they can go.

Welker said she couldn’t have accomplished anything without the help of her parents, who have been extremely supportive and dedicated their time and effort to help Welker become a better soccer player.

Another person Welker wants to thank for her success is Coach McMullen, who has been with her “through it all.”

“[McMullen] has pulled me into his office a lot of times and talked me through what I really want and my goals,” Welker said. “He’s always pushed me to be a leader, and without him I also wouldn’t be where I am today. He pushed me to be out of my comfort zone and play stronger, bigger and better.”

At Southeast, Welker said she thinks she will study elementary education to become a teacher. She is interested in doing so because she has always loved kids and hanging out with them.