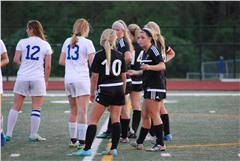 Following the Kickapoo Tournament where the Indians took second place in the Brown Division, Jackson’s girls soccer team traveled to Imperial, Missouri, for a match with Class 4 District 1 opponent Seckman.

Jackson was coming off a 1-0 tournament-championship game loss to Kickapoo, which was also the first time the Indians failed to score a goal in a game this season.

The Indians defeated Seckman 2-0 in each of the last two meetings, but this game had a different outcome since Jackson failed to score once again for the second-straight time this season.

It was a scoreless first half in Imperial between these teams with the first shot on goal not coming till the 30-minute mark.

Jackson’s second-leading scorer with 14 goals, sophomore Natalie Miller, was the Indian with the attempt that was no good.

Five minutes later when Seckman had taken quick possession of the ball, senior Leah Amelung kicked the ball far from the goal, which almost went in had it not hit the crossbar.

Jackson goalkeeper Sam Schnicker had to quickly pick the ball up in the penalty area multiple times in the game to give her team possession.

This did not keep the Jaguars from regaining possession as they kept it throughout the middle of the first half for quite some time.

The Indians got the ball back in the 25-minute mark, which is around when Miller went down and out of the game with an injury.

Miller was attempting to get a shot off when she got caught up with Seckman’s goalkeeper resulting in the two falling to the ground and rolling over each other.

Miller was in serious pain, but when she eventually got to the sideline and received treatment from a trainer it was revealed it was not a serious injury to her foot.

What appeared to have happened was during the collision, the goalkeeper had stepped on Miller’s foot resulting in her to sit out for the remainder of the first and the beginning of the second half.

With Miller out of the game, head coach Justin McMullen had to make a few adjustments, and Jackson nearly scored off a corner kick by sophomore Taylor Nelson to leading-scorer junior Lauren Welker for a head shot.

Nelson had another corner kick before the end of the half, which went to senior Rylee Stafford this time, but her head shot went the opposite direction of the goal.

Coming out of the gate in the second half, Seckman nearly scored from a corner kick by sophomore Abby Icenhower but Schnicker came up with the save.

Six minutes into the second, Jackson regained possession to allow for Nelson to have yet another corner kick intended. Nelson got the ball to Welker again this time, but the head shot was no good.

Seven minutes later is when Miller returned to the game, and she quickly had a shot on the goal that was also a failed attempt.

Five minutes later is when Seckman’s one and only goal of the game was scored, which was made by senior Gabby Schubert.

This goal was made by Schubert after Schnicker ran up to attempt to pick up the ball in the penalty area, but the ball bounced off her and she could not adjust to defend the goal.

On the defensive end for Seckman besides the team’s goalkeeper was junior Maddie Henderson who mirrored each ball carrier near the goal to force a kick out or turnover.

Following that score in the 58-minute mark, Jackson  had three more shots on the goal all no good to finish the game with no score and advance to 10-3 overall.

Jackson will play for the Noon Optimist Tournament Championship on the road against Cape Notre Dame Monday, April 24.