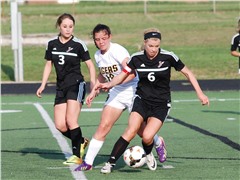 Eleven seconds has been the one thing stuck in the player’s and coach’s minds of the Jackson girls soccer team this season.

With 11 seconds left in last year’s Class 4 District 1 Championship against Northwest on May 18 tied 0-0, the Lions scored a goal to end the Indians season and advance to the state playoffs.

Last week on Thursday, April 27, which also happened to be senior night for the Indians, Jackson got its revenge.

Jackson defeated Northwest handedly 3-1 at home with junior Grace Pehle scoring two of those goals while senior
Randa Norman scored the other goal while also assisting Pehle on one goal.

“Anytime you can win a district game, that gives you a huge confidence boost, and kind of leads you forward into the upcoming district tournament,” Head Coach Justin McMullen said.

The Class 4 District 1 Tournament is set to be held at Seckman starting on May 16. This is the same place where the Indians lost their third game of the season in a three-game losing stretch.

Two of those games Jackson lost in the stretch were tournament championship games, and the Indians could likely see Seckman in the district title game this season.

Jackson traveled to Imperial, Missouri, for its first district game of the season against Seckman, and the Indians fell to the Jaguars 1-0.

The seeds have yet to be set for the tournament, but right now in district play Seckman is 1-0, Jackson is 1-1 and both Northwest and Poplar Bluff are 0-1.

Jackson has the best overall record out of all four teams at 12-4, and first broke its three-game losing streak with a 2-1 win on the road against St. Vincent (9-5-2).

Junior Lauren Welker, Jackson’s leader in goals, scored each of her team’s goals against St. Vincent to bring her
total to 22 goals on the year.

Welker is one goal away from tying her career season-high, which she set last season in her sophomore year at 23 where she garnered All-Conference, All-District and All-State honors.

“We just try and make sure we take it one game at a time, and try and stay focused,” McMullen said. “I think we’ve played well in those games [we lost], but we’ve just been unfortunate and the ball didn’t bounce our way at times.
“It’s coming together — [against Northwest] we played really well, and hopefully we’ll stay on that track.”

The last tournament title game Jackson played in was the Noon Optimist Tournament Championship against Cape Notre Dame, which had to be rescheduled twice due to bad weather.

Going into the game, Jackson was the winner of the last two Noon Optimist tournaments, but the Indians fell to the Bulldogs 3-1 on the road.

The Indians head into the second to last week of the regular-season with three-straight games.

The first two will be at home starting against Cape Central on Tuesday and then today against district opponent Poplar Bluff. The Indians will then travel to Kelly Thursday to finish the week.