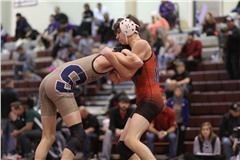 The Jackson wrestling team was able to come away with its second-straight SEMO Conference Tournament Championship over the weekend by scoring a meet-high 337 points.

This was 85 points more than second-place Ste. Genevieve scored at 252 as the Indians had six wrestlers advance to their respective championship match.

Only one wrestler for Jackson came out victorious to claim first place in their bracket, which was sophomore Alec Bailey at 113.

“Alec is a really great technician,” Jackson head coach Steve Wachter said. “Alec is very committed — he might be the most committed person on our team as far as traveling, going to camps and putting his time in wrestling. That dedication is paying off for him, and he had an outstanding tournament.”

In 2017, Bailey won the 106-pound conference championship as a freshman when he defeated Dexter freshman Travis Waldner by a 3-2 decision.

Two first-place matches for Jackson were decided by only one point in the final seconds of the third period, starting with junior Braden Vaugier against Farmington senior Ian Asher in the 138-pound championship match.

Heading into this year’s meet, Vaugier returned as a reigning conference champion having won last year’s 132-pound bracket by defeating Asher via decision at 3-2.

Asher was able to come out on top over Vaugier this year with a 9-8 decision to win the 138-pound title as Vaugier held the lead late at 8-7 until Asher was able to score two more points for the win.

“[Asher] is an outstanding wrestler and it was a great match,” Wachter said. “We knew that one could go either way, and that it would be tough.”

The other championship match where Jackson only lost by one point was the 160-pound bout where freshman Daniel Dickerson faced Windsor senior Connor Richey.

This was Dickerson’s first varsity tournament of his career since he is filling in for senior Jacob Dudley, who is out for the remainder of the season with a broken ankle.

Heading into the conference tournament, Dickerson was undefeated at the junior-varsity level at 31-0, and he did not lose a varsity match until facing Richey for first place.

Richey defeated Dickerson 5-4 to hand the freshman his first loss of his high-school career, but Coach Wachter is proud of how Dickerson handled himself in his first varsity tournament.

“Daniel did a tremendous job coming in behind Jacob,” Wachter said. “It’s a big step up from JV to varsity, but Daniel made that step up. Daniel is very strong and athletic for his age, and he just did an outstanding job [in this tournament]. I couldn’t be more proud of him, and he just got beat in the last couple of seconds or he would’ve won a conference title.”

The other freshman who was able to advance to the championship round for Jackson was Garner Horman at 132 pounds, who faced Hillsboro senior Dylan Owens for the title.

Owens was last year’s 120-pound conference champion, who also placed second in the Class 3 State Championships in 2017 before making the move to 132 pounds.

Horman fell to Owens in the first-place match by decision at 5-3 to finish as one of the six underclassman for Jackson to finish in the top three of the tournament.

One of the other underclassman for Jackson to place in the top three was sophomore Cole Amelunke at 182 pounds, who also had to face a Class 3 All-State wrestler in Windsor senior Ryan Yarnell, who took third at state in 2017.

Yarnell came into this match as the reigning 182-pound conference champion, having defeated former Sikeston wrestler Joshua Stinnett 5-3 to claim the gold.

Amelunke was wrestling at 195 as a freshman in 2017 where he placed second in conference by falling to Ste. Genevieve’s Wade Hahn in a 5-3 tiebreaker.

In the 182-pound SEMO Conference Championship match, Amelunke still only managed to score one point as he fell to Yarnell by a 5-1 decision once again.

The final championship match for Jackson was at 106 pounds as sophomore Rhett Wiseman took on Ste. Genevieve sophomore Jacob Dickens.

Dickens is ranked fifth overall in Class 3 by MissouriWrestling.com, and he was able to hold Wiseman scoreless for a 4-0 win to capture the 106-pound title.

“I thought our effort was really tremendous this weekend,” Coach Wachter said. “It’s probably the best we’ve wrestled all year. The finals were tough, but we knew it would be tough because we’re pretty young. When you look at it I have everyone in the finals coming back next year. The kids they had to wrestle were really outstanding. I think four of them might have wrestled kids that are ranked No. 1 in the state or can win a state title.”

Three wrestlers for Jackson who fell in the semifinals were able to come back and place third overall, two upperclassman and one freshman.

The freshman was Cole Parker at 152 pounds, who fell to Sikeston junior Quincy Nelson in the finals by a 9-5 decision. Nelson fell to undefeated Windsor senior Jacob Warren by major decision at 9-1 for the championship.

The next wrestler to place third for Jackson was junior Justin Singleton, who battled through an injury to eventually defeat Windsor freshman Chris Butts by pinfall with 20 seconds left in the third-place match.

Finally, it was senior Owen Leible to claim third in the heavyweight bracket, who defeated New Madrid County Central junior Jay Maltbia by a 3-1 decision.

“Getting third in tournaments is always huge because third might be the show of the kid who’s one of the toughest ones in the tournament,” Coach Wachter said. “Those three wrestled really well. Maybe the one that was the most inspirational to me was Justin Singleton. He got pinned in a match early the first day, and then he came back and pinned his opponent from Poplar Bluff on the second day. He’s a very mentally and physically tough individual, and he’s a young man that can fight through those things to get it done.”