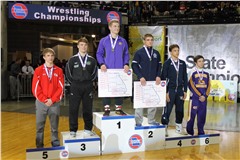 On day one of the 2017 Class 4 State Championship wrestling meet held at Mizzou Arena in Columbia, Missouri, Jackson seniors Zach Flath, Gus Guilliams and Payne Guilliams each won their first match to advance to the quarterfinal round of the championship bracket.

On day two, each of these wrestlers for Jackson lost in the quarterfinal round to end up in the consolation bracket where it was then win or go home. First up for Jackson later that day in the third session was Gus at 126 pounds, who faced off against Staley senior Ethan Mott.

Flath faced Waynesville senior Teyler Bruch after Zach’s 7-5 loss to Holt junior Jeff Farris in the quarterfinal round. Bruch lost his first match of the meet 7-5, but defeated Parkway South senior Bryce Raphael to advance to the second round of the consolation bracket to face Flath.

Flath lost the bout against Bruch 6-2 to end his Jackson wrestling career and senior season at 37-9 overall. Flath was a SEMO Conference Champion this season and also placed second at the Class 4 District 1 Tournament to earn All-District honors.

After losing to Hickman senior Landon Wiswall by one point at 4-3 in the quarterfinals, Payne faced Jefferson City junior Reece Neighbors and Guilliams defeated him 5-0.

Moving on to the 195-pound consolation bracket, freshman Cole Amelunke, who was the only underclassmen for Jackson in the meet, pinned Timberland senior Joseph McCoy two minutes, 39 seconds into the match to move on to round two.

On day one for Amelunke, he faced fellow frehmen out of Park Hill, Ashton Sharp, who went on to place third in the meet to earn All-State honors. Amelunke only lost his first match in his first-ever state championship appearance 1-0 to Sharp.

“[Amelunke] competed really well,” head coach Steve Wacther said following the meet. “His first match that he lost 1-0 — who was the Cadet National Champion, and [Amelunke] wrestled him 1-0. That was a great match.

“[Amelunke] came back and wrestled really well — the kid that he lost to in the wrestlebacks was an All-Stater, and he placed again this year. I’m really proud of Ammo, and I’m also proud that he had a chance to come up here and watch it. He knows he can be a young wrestler and be a highly-successful wrestler because he’s seen others also do it up here.”

The wrestler whom Coach Wachter is referring to is Parkway South senior Jack Marak, who went 47-7 this season and placed fifth in this year’s state meet.

Amelunke lost to Marak 3-1 to end his first season ever with Jackson. He finished with an overall record of 32-17 while also landing All-Conference and All-District honors.

Next up for Jackson in the second round of the consolation bracket of this year’s state championship meet was senior Bryce Dickerson in the 220-pound weight class.

In Dickerson’s first match of his final Class 4 State Championship appearance, he faced Francis Howell Central senior Jackson Berck, who only had two losses on his record entering the match.

This match lasted the entire three periods, but Berck came out on top over Bryce 4-2 and went on to wrestle in the Class 4 220-pound State Championship Match against Chaminade junior Danny Conley.

Conley defeated Berck in a 2-1 tiebreaker to become the state champion, and Dickerson went on to win his first match of the consolation round against Park Hill freshman Johnny Wilson 9-7.

Dickerson’s next opponent was another freshman in Jefferson City’s own Branden Baccus.

Dickerson’s final season with the Jackson wrestling team came to an end with this match as he fell to Baccus 7-2.

“Both [Dickerson and Flath] wrestled tough this year — both had great years,” Coach Wachter said. “Bryce overcame all of that adversity [with injuries] and made it up here, and he wrestled really tough. Zach wrestled [junior varsity] last year, and has just made such a big level jump. He put in a lot of time, and I’m very proud of Zach. He also went through the little league program, and he’s gotten better and better, but this year he probably made his biggest jump. He had great effort up here, and he wrestled hard.”

The third round of the consolation bracket in the state meet was the final match for each wrestler to see if they would place in the top six to earn 2017 All-State honors.

The two undisclosed leaders of this team, Gus and Payne Guilliams, who also happen to be cousins, were Jackson’s final chance of continuing its streak of having All-State wrestlers.

Gus had placed six last season in the 120-pound weight class to earn All-State honors, but Payne failed to do so after losing in the second round of the consolation bracket at 138 pounds.

Gus was up first for Jackson in this third and still win or go home round where he would face Waynesville junior Sean Sax.

In this match to decide whose season would come to an end or place at this year’s Class 4 State Championship Meet, Guilliams led throughout the way and seemingly had the match sealed after a one-legged sweep for two points on Sax.

Guilliams tried to hold on for the win in the third and final period, but Sax managed to score two points in the final five seconds to defeat Gus 9-8.

“That’s one of the most heartbreaking matches that I’ve ever coached in 35 years because he wrestled such a great match,” Coach Wacther said. “He was on top of his game, and he was prepared. It was very heartbreaking right at the end. Kind of a weird situation on how it occurred — how he got beat. I’ll tell you one thing, it wasn’t because he wasn’t going out after it. I thought it was one of the best matches he’s wrestled in his life.”

Guilliams finished his final season as a member of the Jackson wrestling team with a 38-4 overall record, a SEMO Conference Championship and earned All-District honors.

Jackson’s last hope for an All-State wrestler this season, Payne, won three out of his four final matches of his high school career to place fifth overall in the 152-pound weight class and earn the first All-State honors in his wrestling career.

Payne faced a familiar opponent in his final match of the season, which was Hickman senior Landon Wiswall who he had faced earlier in the meet in the quarterfinal round.

Guilliams won his final match handedly 6-1 to place fifth and earn All-State in the 2017 Class 4 State Championship Meet, which just happens to be his second All-State honors this season.

“We had a lot of close matches this year, and it kind of came down to who wanted it more at the end,” Guilliams said on his final match against Wiswall. “I feel like I kind of stayed patient throughout the match and stayed tough.”

Guilliams was named to the Class 5 All-State second team after recording 100-plus tackles as a safety for Jackson’s football team.